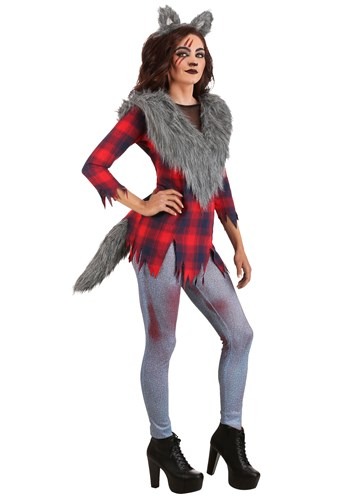 It's a pretty gross assumption that every werewolf is going to turn into a slathering sort of slobbering savage. Let's be honest, when we think of wolves, most of us picture a pretty noble creature. Some have that glorious mantle of wizened fur over their shoulders and neck. Nearly all of them have that cool and collected look in their eyes. And the howl that they begin is so often a crisp tone that echoes through the night, joined by the rest of the pack.

Where did we get the idea that the wolf-man should be some crazed and drooling beast that cares nothing for its style? Fortunately, we've got a new pack-leader that looks ready to take up the charge. This is the werewolf that maintains some sanity when she transforms. Sure, she's a hunter. She's definitely going to tear into some victims... but she's not attacking randomly. There is purpose. There's intent. And... she's not going to let any muck get on her lovely fur!

The full moon is coming and the wild is calling. It is time to answer your destiny and transform with the help of this Ruff and Tumble Werewolf costume. This is a Made by Us design that was formed in our own in-house studios by a design team that truly understands what the wolf is made of! Sure, the costume includes a pair of gray and seemingly bloodstained leggings. Yeah, the flannel shirt has some ragged edges. But, you've got to hunt and shapeshifting is complicated. But, your fur shawl and tail show that you're here, aware, and refined... no matter what the victims of your attack might have thought at the time...

Ready for a Run

Alright, so all werewolves probably have that hunter's instinct and a bit of a thirst for the blood hunt, but that doesn't mean you can't look particularly awesome while doing it. This Ruff and Tumble Werewolf is there for the fun.