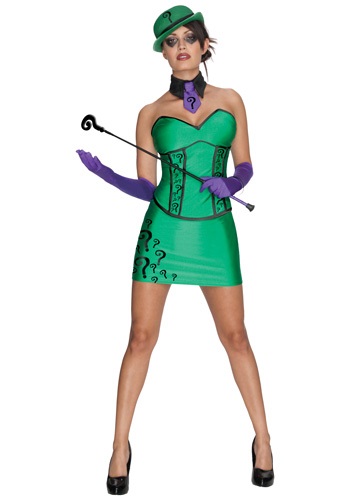 Riddle me this, riddle me that, who's afraid of the big, black bat?

The Riddler has gone through a lot of changes throughout his villainous career. Like many of Batman’s nemeses E. Nigma started out as an over-the-top, playful goofball, but he gradually evolved into a criminally insane murderous egomaniac. But what makes Riddler such a thorn in the Dark Knight’s paw? He doesn’t run a giant crime empire like Penguin. He can’t lift two tons like Bane. But he has a raw intelligence that rivals even Batman’s, a gift he uses to create riddles and deathtraps for his own personal gratification. Riddler’s not after power, money, or revenge. He just wants to prove that he’s better than everyone else. Isn’t that something we can all relate to?

It’s a pity that Riddler’s so into...well, riddles. He’s got the brains to pull off any kind of caper he’d set his mind to, but his compulsion to give cryptic clues to solving his crimes always triggers his inevitable downfall. If only he were a little more humble -- but then, why be humble when even the mighty Batman is just a bumbling child before your own godlike intellect?

If you’re the smartest but also up to no good too, why not dress up as The Riddler yourself? With this five piece ensemble you’ll have the rogue genius’ signature emerald green look down pat, from the question mark print dress to his signature bowler hat. Just don’t be surprised when no one can figure you out!

Product Reviews  Write A Review1 Review
Not worth the money
By Current Customer / August 30, 2016
The material is nasty and poorly made. You need to wear a body suit underneath it as it shows off every lump and bump. I would have sent it back but you lose 15% in restock charge and then pay the postage making it unworthy of a return. Waste of money
Was this review helpful to you?YesNo1 person thought so and 0 didn't.
Get 20% Off