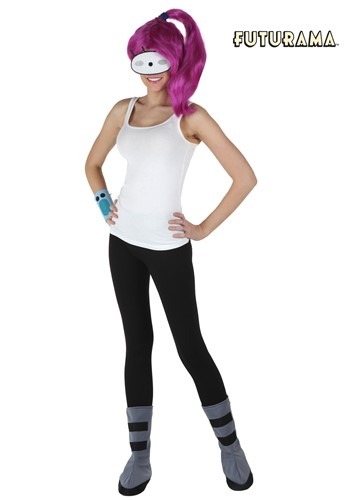 Ah, the great Turanga Leela, one one of the many inspiring success stories of the turn of the 31st Century. Raised in a minimum security orphanage with little idea of her own origins, Leela beat the odds at every turn. Taking control of her own destiny, she employed physical skill, mental toughness, street smarts, book smarts, and a “never say die” attitude as she clawed her way up from the bottom, eventually earning herself a plum position as… well, captain of an outdated ship making routine deliveries for a failing company staffed by a team of barely functional losers. But still, she’s the captain!

Even if Leela’s accomplishments don’t add up to quite as impressive a total as she might have hoped, she’ll always be our favorite one-eyed future pilot. And whether or not they admit it outright, we suspect the Planet Express crew would say pretty much the same. (Well, except for the “future” part. To them it’s the present. Except for Fry. For him it’s the future. But also the present. You know what, we’re sorry we brought it up.)

Fix your eye on the prize in this space age costume kit, featuring a synthetic fiber wig in Leela’s signature purple, with an included hair band for securing her all-important ponytail. The large eye mask fits around your head with an easily concealed elastic strap and features mesh holes for your own eyes - just because Leela can see fine through a single eye doesn’t mean you can do the same. Finish it off with a wrist communicator and a pair of boot covers and you’ve got yourself a look that could launch a thousand ships. Or at least the one. If anybody bothered to change the oil recently. And that’s a big “if.”