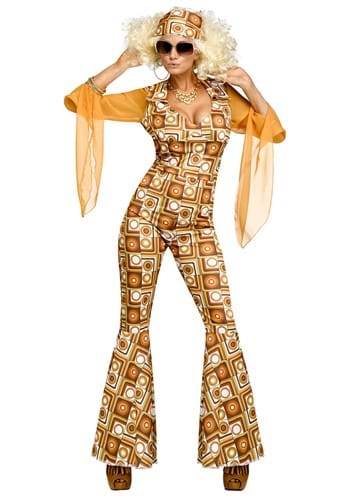 The original bell bottoms were not invented in the 1970s like most people think. That was an attempt at stealing the awesome style from the early Americans in New England, and it would have worked were it not for the wily investigations of our journalists. What they discovered was almost too amazing to believe!

They found that the original bell bottoms were actually made with real, several hundred-pound bells. In fact, the liberty bell was once attached to a pair that was worn by George Washington himself in some of the early battles of the Revolutionary War. It was cracked when he busted a move so sweet that the English were forced to back all the way off the dance floor, back to Boston. Well, it’s either that, or our investigative journalist Dave has some explaining to do…

In any case, this Women’s Disco Diva Costume pays homage to the clothing of the funkiest time in history in style. The retro pattern on the jumpsuit and the crazy cool colors work together to take you right back to the good ole days of disco. Get ready to do the macarena under the neon lights when you throw this costume on!

Get Your Groove On

If you’ve got disco fever, then this costume just might be the cure! You’ll be partying like it’s 1969 in this Women’s Disco Diva Costume. Keep on steppin’, my man, and bust some far out moves for us. It’ll be a slammin’ hit!