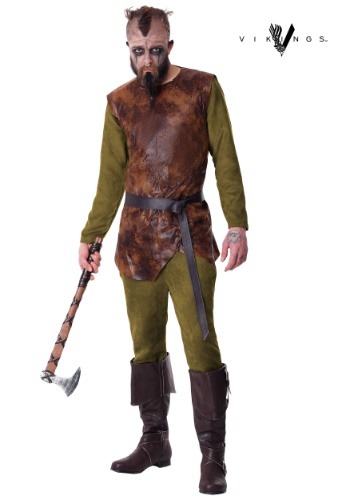 When it came time to do the impossible and cross the wide sea to find a land that Ragnar and Floki weren't even sure existed, Floki was there to put his mind to the task. He not only finds the best lumber for the ships, he sees inside the trees before he even makes a cut. Sure, he's a complicated guy but when it comes to seacraft, the gods' love his boats! And to him, that's nothing to joke about.

Our creative team is pleased to present this licensed Vikings Floki costume. You'll look ready for battle and designing new seafaring technology in this rough and tumble look. This Made by Us look features a faux leather tunic with oversized stitching on the front and a faux leather belt around the waist. The soft green undershirt and pants will keep you warm as you sail through the fjords and on to unknown lands. Just to be sure to add Floki's dramatic eye makeup to make your character instantly recognizable. Now, whether you use charcoal or eyeliner is up to you!

Finding solutions to unsolvable problems is what Floki loves best. When you step into his character, you'll need to think on your feet. Maybe you're heading out with Lagertha, Ragnar, and Bjorn Ironside or maybe you're heading out on a solo expedition. Either way, we're pretty confident you'll find adventure. Just make sure you've got a prop ax at your side. Whether you're building a ship or leading an army in battle, Floki is never unprepared!