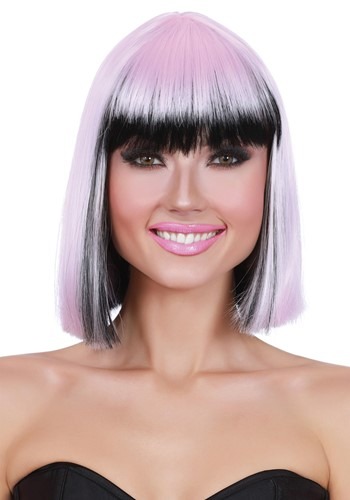 Hairdo, to clarify. We realize that some people may have read that title and been a little confused, so we want to clarify that we're talking about one drastic hairdo. And by drastic, we mean something that is a bit out-of-the-ordinary. Something unique and unusual. Something that will catch eyes and turn heads. Something special.

Alright, now that that's been cleared up, let us explain why this hair is so drastic. Firstly, it's two-tone. This wig is not one but two colors (and two very different ones at that). This wig is both pink and black. Second, this wig has a seriously sharp syle. Just look at those pin-straight tresses and those long feathery bangs (it's already been pre-styled for you, so don't use any heated styling tools on this guy). Conveniently, this wig is also synthetic and adjustable. In short, this Two-Tone Pink & Black Bob Wig is phenomenally unique. Which means it's totally perfect for an alien, supermodel, superhero, or any other character that you can think of that needs some stand-out style. Of course, we don't mean to judge. If you just want to wear this wig to wear it, that's perfectly acceptable as well. You do you. Or rather, you do whatever hairdo you want to.