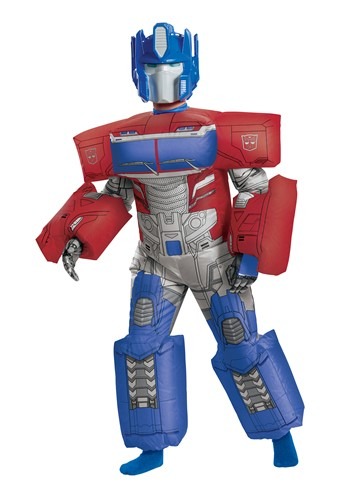 We understand. When we were kids, Transformers were life. Every Saturday, we'd scuttle to the living room with a bowl full of cereal in our hands, and a warm, happy feeling in our little hearts. Optimus Prime and his Autobot pals would foil the Decepticons once again, and Earth would be safe until the next Saturday morning. Of course, the rest of the week would be filled with daydreams of joining the Autobots on their heroic adventures, waiting with anticipation for the next episode... and sometimes, we'd even dare to imagine what it would be like to be a Transformer!

Well, if your child is infatuated with the Transformers, then he's probably going through the same feelings right now! He probably spends a ton of energy imagining what it would be like to transform into Optimus Prime. The good news is that with this officially licensed Kid's Inflatable Optimus Prime Costume, your child will get a shot at becoming the real deal.

Inspired by the classic Transformers character, this Optimus Prime Costume turns your child into the heroic Autobot that's dedicated to fighting evil. The costume starts with a full jumpsuit that has elastic in the wrists, ankles, and neck, to create an airtight fit. The exterior features printed details taken straight from the Transformers cartoon series. The costume also comes with a small fan device, which inflates the costume with just the flip of a switch! To bring the whole look together, the outfit comes with a mask, which is molded into the shape of Optimus Prime's face. When your child has it all on, he'll feel fully equipped to take on Megatron and his army of evil robots!

If your child spends most of his time daydreaming about robots, then it might be time to suit him up in this Optimus Prime costume! It's an easy choice for any Transformers fan!