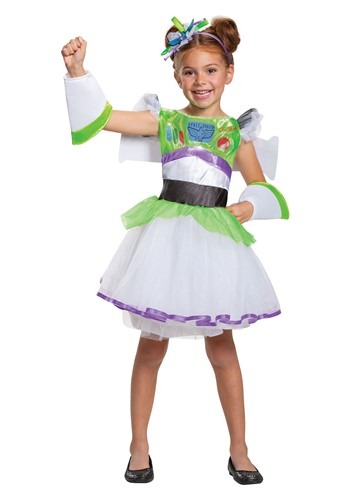 Most have heard the stories of the Space Rangers. They know that this is a team of amazing adventurers that confront the dastardly, Evil Emperor Zurg in an effort to save the known galaxy from his domination. Some have even watched the series to learn of the Rangers' quest to find and secure the LGMs who find everything in the world worth a profound "Oooooh!" True Rangers even know the secret handshake and go-get-em attitude necessary to join the ranks!

But, did you know of the newest and most amazing recruit to the Space Rangers? Turns out that the galaxy just isn't complete without a mighty princess to stand toe to toe with the evil Emperor.  With the armor of the Space Rangers, the confidence of Buzz Lightyear, and the adorable power that no other toy could ever reach, the Pixar Princess is finally ready to come to Earth and teach us all what fun really is!

Give your little darling the wings of the Space Rangers and the outfit of a Pixar Princess with this officially licensed Toy Story Buzz Lightyear Tutu costume. This dress is adorably designed based on Buzz's look from the iconic films. It includes a puffy and layered skirt lined in purple ribbon with a small green apron at the waist. The top is styled after Buzz's armor. Finish off the look with the detachable wings and a pair of flared armor cuffs. All your kiddo will need after this look is a trio of alien buddies!

We can't say that this Buzz Tutu costume is going to make your little one ready to join the ranks of the rest of the official Disney Princesses, but you all definitely have our vote! Until the crown comes, your darling is going to love protecting the galaxy (or the toy box) with this dress version of Buzz Lightyear's look!