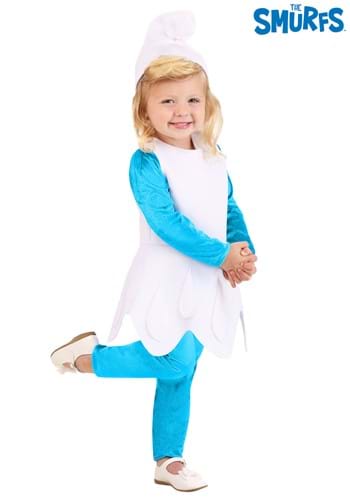 Smurfette may have started out as just another attempt to find the Smurf village. While Gargamel thought this plan out a little better than his other plans, it never accomplished his true goal. He nearly found his way into the village to capture those peace-loving Smurfs and use them to make gold. Gargamel never expected Smurfette, made from sugar and spice but nothing nice (crocodile tears, half a pack of lies, a chatter of a magpie, and the hardest stone for her heart) would decide she wanted to be a real Smurf and abandon Gargamel's plan.

While Gargamel intended Smurfette to be nothing more than a no-good spy, he apparently got his sugar ratio wrong and that stone heart he used must have been something else entirely. It's good news for the Smurf Village, especially Smurfette. She's become the most popular Smurf in the whole village and a constant reassurance that while Gargamel is always up to something, it probably won't go according to plan.

Create your own Smurfette (without the Gargamel recipe) with this exclusive Smurfette Costume for your toddler. She'll be sugar and spice and looking really nice in the scallop-hemline of this officially licensed Smurfette dress. With blue velvet sleeves attached to the dress and matching leggings, your little one will have the perfect Smurfy color. To complete your little Smurfette's look make sure to add the included Smurf hat to her perfectly coiffed hair (or use it to hide the tangles she wouldn't let you brush).

Your toddler may not know who Smurfette is, but you've always seen the similarities between the two little characters. On her best days, she is as charming as Smurfette after joining the Smurf village. On her worst days, it seems she was made from Gargamel's Smurfette recipe. Find out which version of Smurfette your toddler is with this exclusive costume—will she return to Gargamel, or share her Halloween candy with the whole village?