The Smurfs Smurfette Costume for Girls 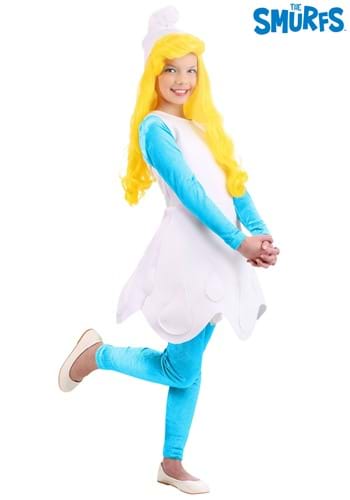 What exactly are the Smurfs? Are they a kind of fairy creature that dwells in mystically hidden mushroom villages in the middle of the forest? That seems to be the most likely situation. They couldn't be little imps or demons. Way too nice for that kind of origin. It honestly has us all stumped! Fortunately, we're not quite to the point of Gargamel. His obsession is downright problematic, don't you think!? Trying to gobble them up or turn them into gold? What's he even thinking!?

That said, we have to give him a hint of credit. He did put together some truly serious magic to create Smurfette. Clay, stone, a whole bunch of magic... and apparently some of his scraggly hair, too, for some reason. Unfortunately, his version was just a bit... defective, let's just say. But, of all the magical creatures in the Smurf Village, there is no argument that Smurfette is genuinely magical. Brought to true life through the love and harmony of the Smurfs, she instantly became our favorite member of the village.

We're crazy for Smurfs... but not quite ready to try to create our own. Instead, we're happy to help you turn your own tyke into one through the magic of our Made by Us costume line. Our in-house design team put this Smurfette costume together to make sure your kiddo's smile is a thing of legend! The look starts with a flower-petal dress with sky blue sleeves and a pair of matching leggings. The Smurfette hat completes this simple Smurfy ensemble.

And a Supernatural Smile

Of course, the best part of bringing Smurfette into the fold was the bright smile that all the Smurfs soon wore! Be prepared to do that in double when your kiddo does the very first twirl in this Smurfette costume.