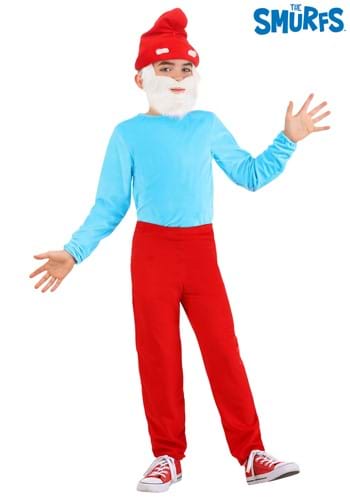 Papa Smurf is the big cheese in Smurf Village. Why? Well, he's the oldest Smurf in the village, he has the most experience, and, most importantly, he has magical powers! If there's anything that makes you qualified as leader of the Smurfs... it's magical powers! He does a good job of teaching the other Smurfs how to be nice to one another and he makes sure to foil any evil plans that Gargamel might be cooking up.

Does your child want to be the big cheese of Smurf Village? Does he have a knack for foiling evil plans? Does he just happen to look awesome in red? Well, then it's time to dress your little one up in this Kids Papa Smurf Costume!

This Made by Us costume is officially licensed from the classic cartoon, The Smurfs. It comes with everything your child needs to transform into Papa Smurf! It starts with a light blue shirt that's the color of the Smurfs. The shirt fits with a zipper in the back. The pants are bright red and fit with an elastic band in the waist for a snug, yet comfortable fit. The hat is the curled shape seen in the cartoon and matches the bright red color of the pants, but it comes with a pair of awesome eyebrows attached tot he front. Finally, the costume comes complete with Papa Smurf's beard, which attached with a hook and loop fastener in the back.

If your child is cut out to be a leader, then he's ready to take on the role of Papa Smurf! Of course, be sure to check out all of our other Smurf costumes to transform your whole family into a group of Smurfs for Halloween this season.