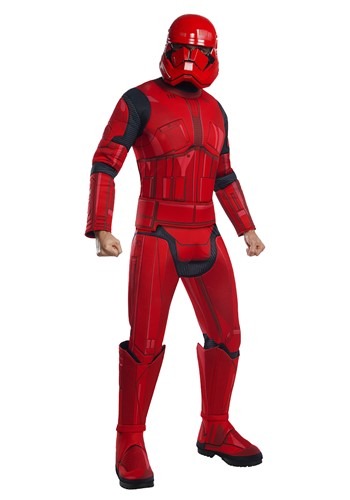 The Stormtroopers have had a long history of chuckles. No matter how shiny their white armor may have been, their aim was just disastrous. Even droids started laughing at the likely chance that they'd be struck by the errant blaster fire of one of the clones. Was it the helmet? Was it the repeating genetic code? Nobody could really ever figure it out. But, it made for decades of mockery for the foot soldiers of the Empire. But, no more.

Long ago, during the Jedi Civil Wars, rumors were cast wide of red-armored troopers that not only served the Sith but were even part of the faith! With the fight coming to a head in the Rise of Skywalker, the Sith Trooper march continues on! A force of terror and intimidation, one can only surmise how true the aim of these Sith soldiers may be! Worse still, what other mysterious powers may lay beneath the gleaming crimson armor!?

Channel the excitement of the Rise of Skywalker with the return of the Sith Trooper in the form of an epic (and officially licensed) costume. This jumpsuit is a comfortable and easy to wear costume that features all-over printing so it resembles the red armor of the Sith Trooper that returns in Episode 9. A molded helmet tops off the look and mesh covering over the eyes provides limited vision while keeping the cool and frightening look of the adapted Stormtrooper. Finish off with your boot covers and pick up a blaster to join the Sith Legion.

Now, we can't guarantee that you'll have any Force powers just because you have Sith in your name, but we can't assume that you won't, either. Climb into this gleaming red costume and feel the might of the Sith, whether you've got the Dark Side of the Force beyond you or not!