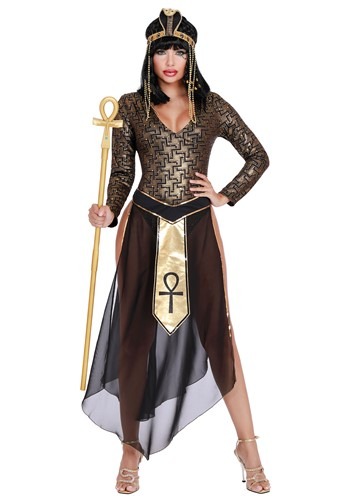 Cleopatra might have been lost to history if she didn't know how to make an entrance. Seriously! She wasn't first in line. She was a woman. She could easily have lost her power. But she wanted to rule and she would stop at nothing to make that happen. When her brother cast her out of Alexandria, the capital of Egypt, she simply waited until Caeser came to visit and talk politics. She then had her servants roll her in a rug that was a "gift" for the ruler of Rome. They unfurled her before the Roman general and let her make the first impression for the history books. With her grace, wit, and wisdom, Cleo convinced the military genius that it would be better if she took over the Egyptian rule instead of her troublesome brother. And that, friends, is history.

It takes a lot of confidence to rule like legendary Cleopatra and no ensemble says confidence quite like this look. In classy black and gold, this costume features a geometric bodysuit with a sheer panel at the front and back, framing the hips. You'll love the combination of long sleeves and dramatic V-neck. A zipper up the back and snap at the crotch makes bathroom breaks and costume changes a breeze. Topped off with a beaded cobra headpiece, you'll look every inch the queen as soon as you slip into this Cleopatra costume.

Asp Her No Questions

We can only imagine all the secrets that Cleopatra had when she met her untimely end. She knew the secrets of Rome as well as ancient Egypt. But as we're not even sure that the stories we tell about this legendary are true or not, we just have to put ourselves in her place and imagine the secrets she carried. It's your turn to live the legend!