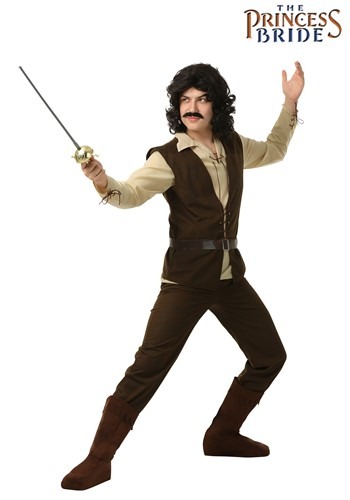 Some men lack the courage to stare danger in the face. Some men lack the fortitude to endure years of training in the art of the sword. Some men lack the glorious facial hair to become a dashing and handsome hero, ready to avenge the death of his father (awesome mustaches are a must for that kind of thing). Inigo Montoya is a man who lacks nothing!

Based on the iconic movie character, this licensed Inigo Montoya costume recreates his outfit from the film, The Princess Bride. The costume comes with the yellow shirt, along with a brown vest. The included pants match the vest and the costume set comes with the necessary accessories, like boot covers and belt, to really make you feel like the Spanish fencer. It also comes with a wig and mustache, to help you achieve the look without ever having to grow your own! That's enough to get anyone ready to face off against any villain in a one on one duel!

Don't forget to pick up one of our toy sword accessories, since you're going to want your sword skills in top shape for the big battle with the dastardly villain, Rugen. Once you've exacted your revenge, perhaps you can party as the daring hero!