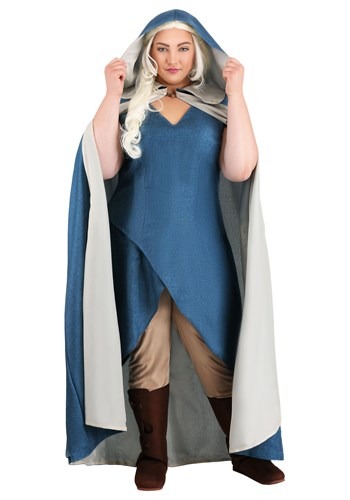 There are a number of grand ways to live out your days as a monarch. Most enjoy the idea of sitting upon a comfy chair, wearing an ornate headpiece, and commanding their many servants to go throughout the kingdom and complete all the tasks set before them. Others dive right into politics. They call on allies and rivals, both, bringing them to large tables where choosing the right chair or drinking wine with the proper gesture can mean eternal peace or violent war!

But, are you that kind of queen? Or are you the type that wants to show that you have the might of legend, the bravery of mystical beasts, the adventurous spirit of a dragon!? These are the kinds of queens that aren't content with just commanding the world to change. They want to be out there. Perhaps they will wield weapons themselves. Perhaps they'll bring their charm direct to the people and show them that this is the queen that they would call their mother!

Rise and become the Dragon Queen in this exclusive costume. This Made by Us look was crafted in-house by a team of designers that knows just how brave a queen can be! This ensemble includes a blue dress that zips up the back and pairs perfectly with the buttoned traveler's pants. The long cape has a metal latch and a massive hood. Who needs a coronation when you can crown yourself with this lovely wayfarer's look?

It is one thing to have a group of soldiers that will follow the crown because they are well paid. It is quite another to earn a legion of devoted men, women, and beasts that follow you because you are there on the field alongside them! Wear this Dragon Queen costume and command respect, love... and power!