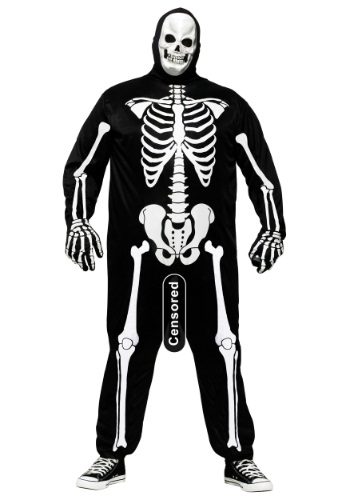 Ain't nothing gonna keep me down

We learned from Chumbawumba, that when we get knocked down, we get back up again. That ain't nothin' gonna keep us down. And so when we die, what are we gonna do? Get back up again of course, just like those white boys from England told us to do way back in 1997.

So, when you go to the grave don't get sad. Know that your weary bones will rise again. You can terrorize folks like in the movies. Shake rusty chains, to scare the neighbors. Put a sheet on, and scare the kids down the street. Make sounds like boooooo, and ooooohh. You can try to be as terrifying as possible. Or you can just live it up after you already went down to the ground, by partying!

If you haven't bit the dust yet, but still want to party like the dead, you can always put on this Plus Size Skele-Boner Costume. Oddly enough you will be called the life of the party. And if at any point during the drinking and frivolity, someone tries to knock you down. Get back up again, and start signing like those white boys from England did in 1997. I get knocked down, but I get back up again. Then show everybody just how much you get back up again.