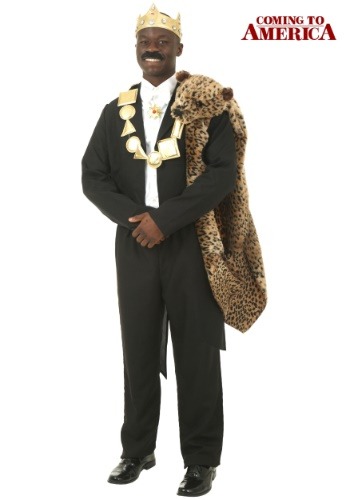 American culture can be a bit of an enigma. That’s especially true those who’ve never set foot outside of their country. Just take a look at Akeem, the soon to be King of Zamunda. He’s only been in the country for a few days and everything seems to puzzle him. Like, how do people go about mopping a floor? What’s the deal with American Football? Why does everyone love Soul Glo so much? Why is Samuel L. Jackson living like a pauper when he’s obviously a very talented actor who could get a role in just about any movie he wants? And why do so many of the patrons at the barbershop look suspiciously similar to each other?

Well, the only way to find the answers to these questions is to spend a little time in America! Who knows? Maybe you can pick up a part-time job at McDowell’s and meet the woman of your dreams. You never know!

With this officially licensed Akeem costume, you can become the main character from the iconic 80s film, Coming to America. This outfit recreates the look of Eddie Murphy’s princely outfit. It comes with cutaway tailcoat jacket that has a faux breast pocket and stylized lapels. The shawl fits over your shoulder and is designed to look like a real leopard pelt. Don’t worry though, it’s made from synthetic materials, so no real leopards were harmed in the making of this costume. The necklace is made of large foam pieces and is coated in a shimmering gold paint to mimic the look of solid gold. The matching gold foam crown features plenty of faux gems attached to the front and sides. The costume also comes with a medallion and bow tie to finish out the look. Just pair it up with your own pair of black pants and you’ll look like the crown prince of Zamunda!

If you’re ready to learn more about American culture, or if you just have an intense love for 80s comedy, then you’re going to feel right at home in this Coming to America costume.