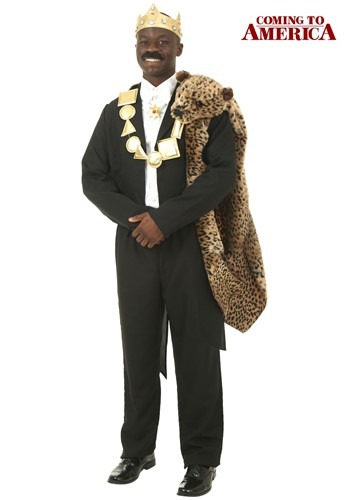 A Life of Luxury

You might think a prince giving up his life of luxury and traveling to a whole new land to live a normal life is a little bit crazy. If you asked Prince Akeem why he would do that, well... he'd probably be too fascinated by something seemingly mundane to answer. But you can do the next best thing by dressing up as the prince of Zamunda in our exclusive Coming to America Akeem Costume, and see what royal life is like for yourself!

Actually, we could see why being a prince and having your every want and need attended to could get boring, even if the idea of having a kingdom one day sounds pretty great. But dropping everything to get a fast-food job in New York City like Akeem did in Coming to America seems like a pretty drastic life change. Since it was in the pursuit of true love and happiness, we can understand, and it lead to some great culture shock moments that definitely must have given him tons of party conversation material. But in the end, the real prize for Akeem was discovering what he really wanted out of life, and isn't that worth more than any kingdom?

Ha, right, sure it is! And partying it up like Eddie Murphy's classic character in this licensed costume is the only way to do it! We've meticulously designed this regal outfit to give off that traditional Zamunda vibe, from the style of the suit, to the look of the medallions, crown, and leopard shawl. When you put it all on, everyone will know that you come from royalty! You won't want to go back to common outfits when the party's over!

If you're a huge fan of the Eddie Murphy classic, Coming to America, then this Akeem Costume is a no-brainer! You'll be ready to find your queen... or get a job at the local McDowell's!