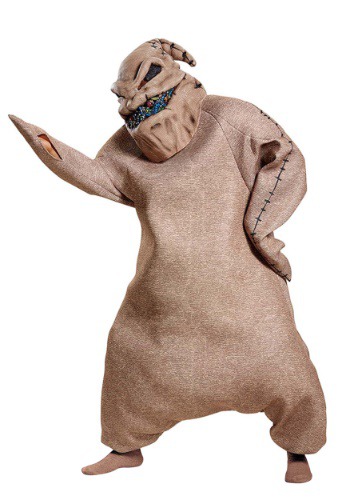 As a kid, you may have been spooked by Oogie Boogie. He's basically the creepiest potato sack ever made. Honestly, he's the proverbial boogeyman so it'd be a little strange if you didn't find him at least a little bit frightening. He has two spiders for eyes, a snake for a tongue, and he's filled to the brim with bugs, all of which contribute to his hideous appearance. But then, eventually, our opinion on him started to change. Oogie Boogie may be a rotten scoundrel, but despite his wickedness, we grew to appreciate him once we aged. As we transformed from children into adults, we finally realized that Oogie, despite being icky, is actually a boss.

Yep, Oogie Boogie is the best at what he does. No one can scare as well as he can (that's right.. not even the Pumpkin King. Sorry Jack.) Plus, he's able to kidnap the one and only Santa Claus, so basically he's the biggest gangster in Halloween Town! As we got older, we also began to admire his gambling skills. The bug-filled burlap sack monster is able to manipulate things to always go his way. We sort of wish we had that kind of power in real life!

If you're a new admirer of the one and only boogeyman then you'll love pulling all the strings in Halloween Town by dressing in this Oogie Boogie prestige costume. You'll get to fill the dreams of mortals "to the brim with fright" once outfitted in the stuffed costume decorated with stitches. The mask's mouth is decorated with colorful insects while the menacing mesh-covered eyes allow you to see out. Wear it and everyone will have to respect your authority!