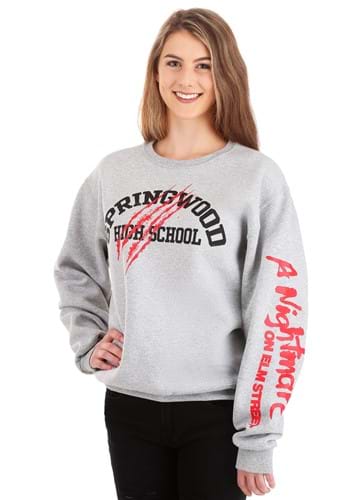 Don't Listen to the Rumors

Welcome to your first year at Springwood High! Now, we know you've heard the rumors, but let us assure you... it's perfectly safe to attend this high school. Pay no mind to the chatter about a psycho-killer groundskeeper that assaulted the younger students. It's just fluff put out by the news station. And that bit about parents trapping said killer being trapped inside of burning shack by angry parents? Well, we're pretty sure that someone spread that story to steal attention away from our school's great basketball record! Oh, and the gossip about the killer stalking people in their dreams to get revenge is totally not...

This sweater is officially licensed from the greatest horror movie franchise of them all, Nightmare on Elm Street. The sweater is a super soft, cotton-poly blend, fleece material. The front has printed school graphics to recreate the style of a school sweater. Of course, it has a splash of faux blood on the front to make it look like you've been victim to Freddy Krueger!