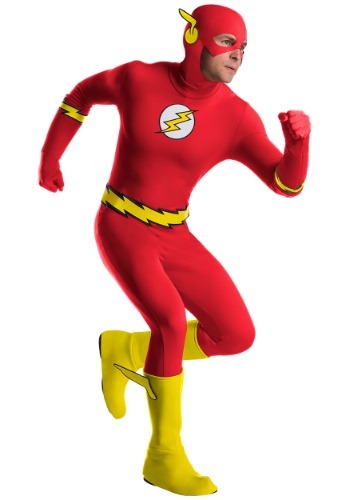 The Flash has the most useful superpower of them all. Sure, super speed might not seem quite as glamorous as Superman’s laser vision, but just think about it for a second. How often would you actually have the opportunity to use laser vision in your everyday life? Super strength sounds great, but then everyone and their mother is going to be asking you for extra help with moving furniture. What a hassle!

Super speed is where it’s at. Don’t believe us? If you had The Flash’s Speed Force powers, you’d never be late again. You could travel to any location in the world in mere seconds and you wouldn’t have to spend money on a plane ticket. You would never need a car again and you could even skip out on riding the train to work. Of course, that’s just a pipe dream, because no one has accessed the awesome power of the Speed Force as far as we know. But maybe with this Premium Flash costume, you could become the first!

The Flash costume for adults is a premium outfit based on his classic attire from the comics. It comes with a bright red jumpsuit that features his lightning bolt symbol on the front. The belt is also shaped like his iconic symbol. The boot covers are a bright yellow to contrast the red and they even feature tiny little wings on the side. The mask has openings for your mouth and eyes, along with yellow wings on each side.

Until The Speed Force Chooses You

Who knows! With the right attitude and the right costume, you might be the first person to gain powers from the Speed Force. Of course, until that day comes, you can always just head out for a job while wearing this amazing costume inspired by your favorite DC superhero.