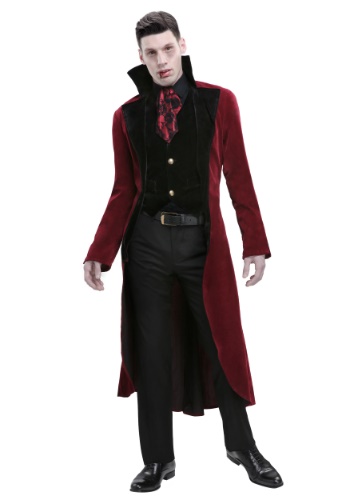 When you turned into a vampire, the condition was far from in vogue. That was way back, even before Dracula came on the market. Back then doorways were framed in garlic and peasants kept their wooden steaks handy. It's been a long time since then and though you've seen the world change you've stuck with your fashion sense, which you're pretty grateful for these days.

Then the modern era came around and, weirdly enough, things became better for you. You'd think that when people became more aware of the presence of vampires they would be more careful but with the classic novels, debut vampires were seen as dapper and sophisticated you became quite popular in many circles. Thank goodness you had been holding on to your velvet long coat with its deep collar and red silk cravat. It's perfect for those evenings when you're stalking the streets looking ominous. You can't be sure so but you've noticed your prey finds you quite fashionable.

You've found a new lease on life, or whatever you'd like to call your existence, you love when your coat blows in the wind and when you wander under the street lamps and the light gleams on the red velvet of your jacket. It's a great time to be a vampire, people think creatures like you sparkle for goodness sake! In a time like this, there's nothing you should do but embrace the fad, it's already lasted a couple years and will probably only last a couple hundred more before people catch on to your danger and start decorating with that annoying garlic again.