Plus Size King of Egypt Costume 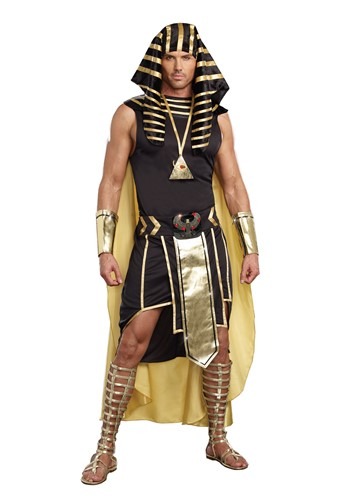 What are kings up to these days? They might have nice cars, live in mansions, and wear golden watches. They might employ suited up men with earbuds. The thing is, even if a king gets driven in a nice car these days that automobile is nothing compared to a golden chariot. That fancy mansion isn't much compared to alabaster columns. Really, just take a gander at the pyramids, they are just the king's graves! So, yeah. When we're talking about kings, we know who did it best!

You may have heard about Tutankhamun, Ramesses, and Amenhotep being supreme rulers and sure, they all lived a pretty lush lifestyle. They were followed by guys in skirts who constantly fanned him with palm frons. They were seen as Gods with large headdresses, makeup to the max, and crazy stiff beards. But even with all of that pomp and circumstance, none of those pharaohs could rock the Casbah like this guy- paleontologists have translated the hieroglyphs on his epitaph as Partyonman. The name fits, this King had the sweetest party pyramid in all of the land, a golden tube in his burial chamber hints that he might have invented the first beer bong. Quite a legacy!

You won't have trouble convincing underlings to carry you into parties when you're wearing this costume. It includes a sleeveless pullover, gold trimmed tank with a gold trimmed skirt. You'll also get a royal headdress, gauntlets, and a faux leather medallion with a jewel on a necklace. You'll feel like solid gold and you'll look like a king but not just any ruler, King Partyonman!