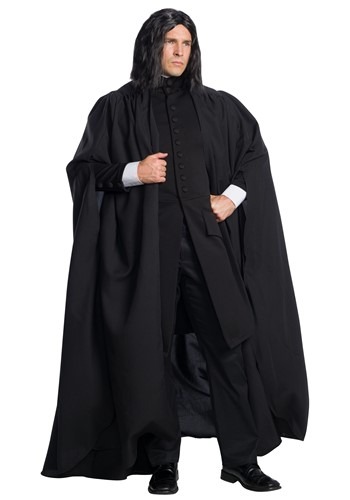 Every wizard that steps into the halls of Hogwarts is going to become a spellcaster. They'll learn their swish and flick of the wand and (eventually) properly pronounce stress on the long 'O' of Wingardium Leviosa to make that feather float up, up, and away. Really gifted ones may even struggle and learn mighty spells like the Patronus charm! They'll compare their various incantations and charms and even go head-to-head in wizard duels. Each will think themselves pretty impressive with their spellcasting potential.

But... not the Half-Blood Prince. He's no mere spellcaster; he is a spell crafter. While most start to learn curses in their later years, Severus Snape already knew a number of them before showing up to Hogwarts! Why? Well, because Severus is truthfully one of the most innovative wizards in history. Most in the wizarding world pick up their wand and are lucky to learn the spells they do. Almost none of them ever create one... and Snape had at least seven under his belt!

Show the world the true depth of wizard innovation with this officially licensed Severus Snape costume. This look includes a frock-style coat with decorative buttons and a Snape-worthy collar. The black robe has fitted shoulders and a long drape over your body with open slits for your arms. You'll feel superior to every other wizard out there as you swoosh your robe and daunt your dark style. And, should a wizard duel occur? Well, a secret pocket in your left lapel has your wand at the ready!

When you stride into the room in this Severus Snape costume, you can feel free to cast any spell you like! When other wizards question your Harry Potter lore, just give a derisive snort and remind them that you're the Half-Blood Prince!