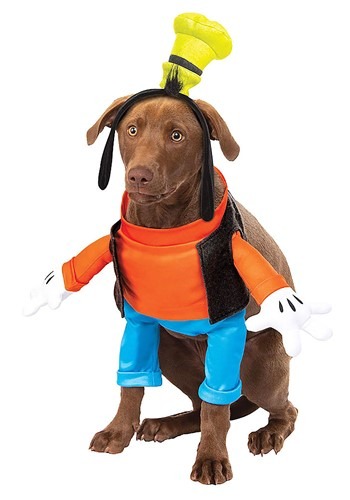 And when it comes to dog costumes, we think your dog could do much worse than dressing up like Goofy. Let's think of some other dog characters the he could be... There's a slavering St. Bernard that runs around eating people, or a sweet old yellow dog (we forget his name...) that gets an unfortunate case of rabies. There's the Hound of the Baskervilles, which is probably one of the scariest costumes and not fit for any family-friendly costume party.

That pretty much leaves Goofy, and we think Goofy is a great dog role model for other dogs. He's really sweet, even if he's not the brightest, and he's always ready to lend a helping paw to his friends. We're not really sure why he always wears gloves (or why he needs shoes, either, for that matter), but you've got to admit he's got a keen fashion sense! His style is iconic... Everyone recognizes him when he walks into a room (and not just because he's walking on two legs instead of four)!

Make sure your dog is the best dressed at the party with this Goofy Dog Costume. The officially licensed costume is 100 percent polyester and looks just like Goofy's iconic outfit. It includes an orange turtleneck with a built-in black vest, which has a hook-and-loop fastener at the back of the neck. There are also attached blue pants that fit over your dog's front legs. In addition, there's a green stuffed hat that has an elastic chin band for easy wear and comes with its own set of floppy black ears.

Let your next costume party go to the dogs with this fun and fancy free Goofy costume!