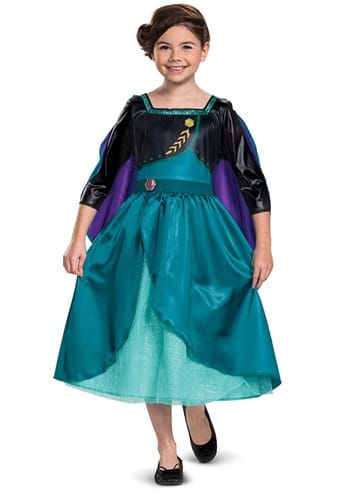 Sure, it's been years since your little one first experienced the magic of Frozen. But 1,000 viewings later and a new sequel have kept her love of Arendelle—and its charming characters—alive and well. She and her best friend have been playing "Elsa and Anna" for as long as you can remember, and now, it's time to bring their big imaginations to life! Finally!

Turn her Halloween into an instant memory maker with this Kid's Frozen Queen Anna Classic Costume. With her best pal playing her sister, Elsa, your child can fulfill the role she has always known she was destined for—royalty! It's hard to say how long Frozen will have a grip over your little one, but in the meantime, isn't it fun to watch her play pretend and live out her Disney fantasies in this gorgeous costume?

This classic costume is officially licensed and will instantly transform your little princess into Queen Anna of Arendelle! It's a teal dress with a square neckline, 3/4-length sleeves, printed details, and a satin skirt, all in Anna's signature teal hue. The dress secures via an easy hook and loop closure in the back. The cape attaches to the dress at the shoulders and looks just like Anna's. The medallion at the waist gives it that perfect final touch!

Queen for a Day

It may be hard giving your kingdom over to your little Queen, but believe us, she'll thank you for it in the end. After all, Anna is a benevolent ruler, and now your child knows just what it's like (finally!) to be her for a day!

Size Chart
2T3T/4T4/67/8
Inches
Centimeters
Costume Sizing Tips
Questions & Answers
There are no questions for this item yet. Be the first to ask a question!
Ask a Question