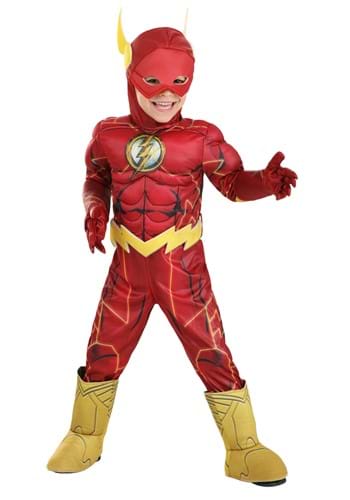 Some kids have a natural gift for excellence in a particular field from their youth. Batman became a super ninja early in his life, Catwoman was already thieving successfully by five, and Barry Allen was already a quick little tyke at the age of three. Well, if your toddler hasn’t shown an extreme talent in any of those areas yet, count yourself lucky!

Little Batman was always so hard to find for one. He had a proclivity for springing out and surprising his parents from very early on. Catwoman’s thievery set her up early in life for a life of supervillainy and crime. But the Flash was the worst! Most toddler dash around the house precipitously, but, boy, could the Flash move! Imagine trying to corral him for bedtime!

A Modern Take on a Vintage Classic

Even though his costume has had a lot of iterations over the years, there can be no doubt that the modern costume is the coolest! This Flash Deluxe Toddler Costume is the perfect way to show your love and knowledge of the Flash. Its Flash emblem is front and center on the officially licensed costume, which has all the details to make you think the Flash himself is in the room. The jumpsuit has built in muscles and the costume also comes with the belt and hat.

If you are looking for the perfect modern Flash costume for your Toddler, then this is the one for you. Though they probably don’t need the extra speed, you will get a kick out of watching them race around as usual as the Flash!