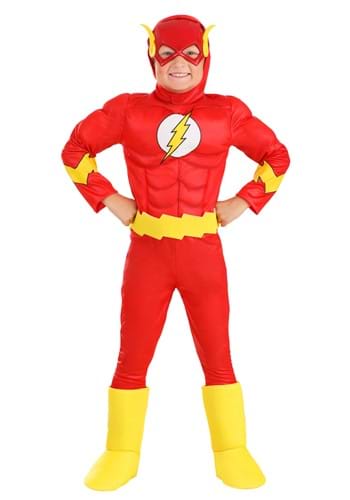 Faster Than a Bullet

At eighteen hundred miles per hour, a bullet is one of the fastest things on the planet. That is an almost unbelievable speed, at which you could cross the United States from coast to coast in less than two hours. That would make for one crazy day! The Flash is able to top that speed by a whopping seven hundred more miles per hour! By the time our bullet got to the other side of the country, the flash could have already seen all of his movies back-to-back!

While he doesn’t like to brag about it (oh wait, he loves to brag about it), he is also fast enough to move backwards and forward in time! Now that is speed! That kind of makes cheetahs and Olympic sprinters look like they are standing still. Now, if only he was a little faster, he could stop us from eating all this Halloween candy every year!

Even though his costume has changed over the years, there can be no doubt that the classic costume is the coolest! This Flash Classic Deluxe Kids Costume is the perfect way to show your love and knowledge of the Flash. Its Flash emblem is front and center on the officially licensed costume, which has all the details to make you think the Flash himself is in the room. The jumpsuit has built in muscles and boot tops, and also comes with a hood, mask, and belt.

If you are looking for the perfect Flash costume for your child, then you will love this one. The authentic details and comfortable feel of the costume will make him (and you!) happy. You are on your own to provide the super speed though!