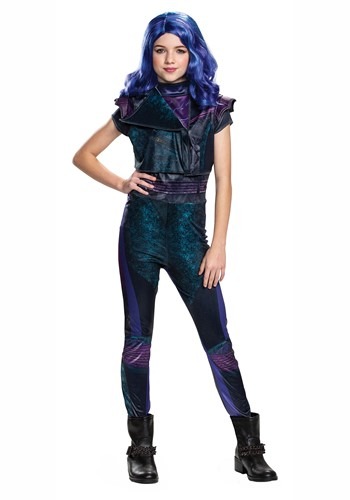 When you're a Villain Kid, you start by looking up to your folks. Sure, they got you imprisoned on the Isle of the Lost for some reason. It had to do with trying to do a few awful things to a couple heroes, take land that they thought may have rightfully belonged to them, or occasionally just wanted to be really pretty and couldn't really stand the competition. But, things change. It's important for any VK (evil or otherwise) to learn to stand on their own two feet.

That means adapting with the times! It means switching things up. Maybe it is something as simple as going for a brand new hairstyle to keep things fresh. Maybe upgrading some of those duds. And, of course, sometimes it means taking on an entirely new mission in life, fighting against Maleficent and her wicked ambitions, paving your path to becoming the future Queen of Auradon... and even finally gaining control over that complicated dragon shapeshifting thing!

It is time for Descendants 3 and that means it is time for another long-awaited dose of Mal! You can help your tyke get ready for Halloween or the best viewing of the Disney film, ever, with this officially licensed Mal costume. This look features a jumpsuit printed and styled to look just like Mal's updated look and includes a vest that has some serious heroic style! Foam shoulders give your kiddo that extra film fun and you can even pick up your choice of Mal wigs to fit in perfectly with the film of choice!

Work Up to the Dragon

Naturally, anyone gearing up to look like Mal is going to be wondering when they get to become a dragon. Unfortunately, that style is still being worked up in the workshops... but this Descendants 3 look for Mal is ready and raring to go!