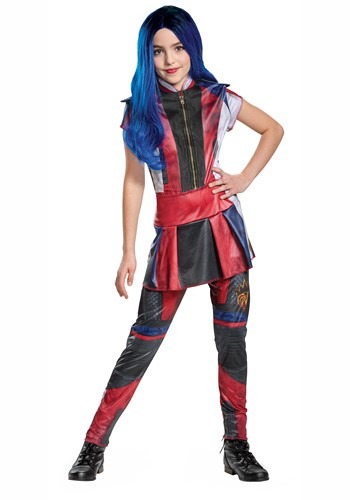 Nobody ever said it would be easy. Being the daughter of a queen is already a huge responsibility. She's a princess, after all. Everyone is going to be looking at her, expecting you to pull off all the very same things her illustrious mother managed. Well, add to that complicated obligation the fact that she's also a powerful sorceress. She better have a ton of magic at the ready. Those are some big shoes to try to fill. (Magical shoes, at that!) Still, there's one more problem...

Okay, so technically we're talking about the daughter of the so-called "Evil Queen." Yeah, a villain through-and-through who is expected to follow in those very same steps. "Go steal the Fairy Godmother's Wand" and "Drop the barrier of the Isle of the Lost!" Those are the kinds of things that all Villain Kids are expected to adhere to. Of course, this princess is ready to live her own, best life! She's got plenty of magic, though she's ready to use it for something just a bit more fun. How about some awesome fashion instead of all that wicked magic!?

Whether your kiddo is an apple that fell straight from the tree or a young hero all on their own, this officially licensed Evie costume from Descendants 3 is going to fit perfectly! This costume will have your tyke feeling like they put Evie 4 Hearts together thanks to the jumpsuit and skirt designed to look like Evie from the films. Foam shoulders and a stand-up collar give just enough of the Evil Queen look to make Disney proud, though this VK is all Aurabon now!

The one thing that Evie really did learn from her wicked ancestor is what it takes to look great. Good thing she applied that to create this Evie 4 Hearts look!

Size Chart
4/67/810/1214/16
Inches
Centimeters
Costume Sizing Tips
Questions & Answers
There are no questions for this item yet. Be the first to ask a question!
Ask a Question