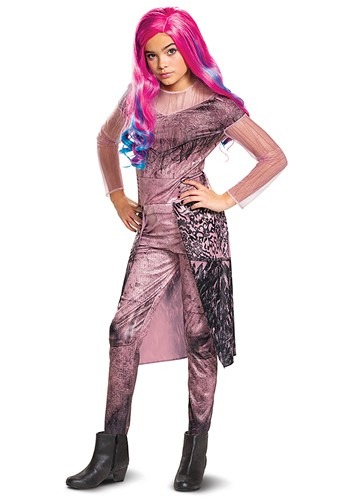 If there is anything that the VKs from Descendants know, it is that it is tough to live up to some expectations. That can make someone go to crazy lengths just to try to make it happen! In the case of the Villain Kids, most of them realized that it is better to just give up on fulfilling their folks' evil ambitions and find their own way to live. But, how about the good guys who have been raised with certain expectations that are suddenly vanishing before their eyes!?

Such is the case of poor Audrey. The should-be queen of Auradon was destined for a life of happily ever after until Mal showed up and distracted everyone with her bewitching magic. Alright, technically, there wasn't so much intentional charming as Audrey would like to accuse the daughter of Maleficent. But, still. Who sits idlely by when a possible villain shows up and sets down claim!? Sure, Audrey might have gone to some unreasonable lengths... but in the name love!

Help your kiddo show the world what it means to chase after your destiny... even if you have to ruffle a few feathers. This officially licensed Audrey costume shows off the style of the misguided princess from Descendants 3. The jumpsuit is printed and styled to be a comfortable fit, whether engaged in magical fights, musical dance numbers, or just fetching candy for Halloween. The sleeves and skirt feature mesh for Audrey's classic style and you can pick up one of our Audrey wigs to celebrate a bright blonde or a sinister pink style, too.

Fishing for Her Fate

Some characters are forced to chase after the fate that they were promised. That might mean doing a few questionable things along the way, but you know that their heart is in the right place! Show the world that they should give Audrey a second chance with this costume for your kiddo.