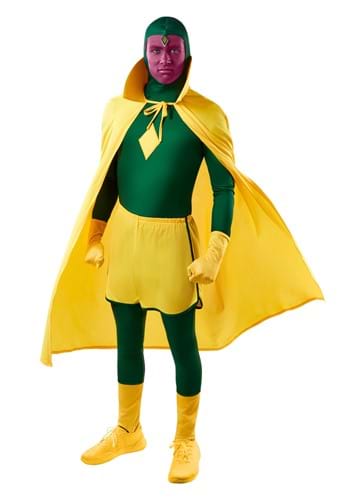 Very often in life, things are not what they first appear. Initial impressions hide cool secrets. Take the classic example of the macho football jock who volunteers at a children's hospital every week, or the older lady whose favorite class to take at her local YMCA is kickboxing (Marge has a mean roundhouse). Or take Marvel's Vision. At first, he was Tony Stark's AI system Jarvis, and then he was seemingly destroyed, and then he was resurrected into a body that isn't quite an automaton, not quite human, and has a glowing stone in the center of his forehead. The whole is more than the sum of its parts, guys - we're pretty sure that's the deep kind of thing that Vision would say.

Suit up to fight crime in this Deluxe Men's Vision Costume! The form-fitting green jumpsuit zips up the back. It has an attached green hood with the Mind Stone fixed in the center above an opening for the face. A yellow diamond on the chest shows your superhero identity as Vision and a yellow cape flutters dramatically as you fly. Yellow shorts and gloves complete the look.

The Best Kind of Power

Along with his fighting ability, Vision has an extra-special talent: the ability to say things in a cool British accent. We're pretty sure he could say anything and it would sound ultra wise. Literally. He could say, "I'm going to put an orange in the toaster," and we'd all say, "Brilliant! Why didn't we think of that?"