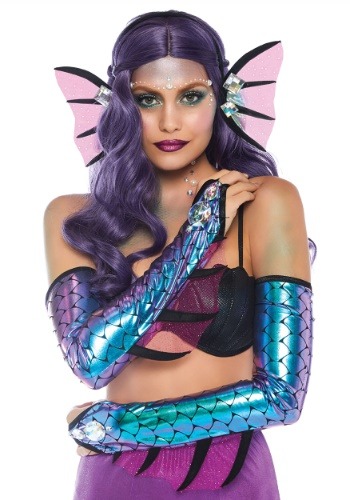 The Irish selkie. The Russian Rusulka. The Norwegian Finfolkaheem. The Mondao of Zimbabwe. All around the world, people have spun tales of different types of sirens and mermaids for thousands of years. Now, people these days often think that mermaids are light and airy. These creatures spend their time brushing their hair under waterfalls and collecting more clamshells in case they ever need to replace their bikini tops. And that's where we have to step in. Like the ocean itself, mermaids are much more complicated than that! Some of these creatures are said to sing near cliffs and lure sailors to a quick and cold end. Others live between shore and sea, never completely home in either. While the Mondao hunts for people out for a swim, ready to take the unsuspecting human to the deep with them. So, when you're choosing a mermaid ensemble, it makes sense to go for a dark and daring look!

This set has fins around your ears and gorgeous iridescent scaley arm warmers. The head fins are a sparkly purple and have large jewels around the head. Matching jewels are on the back of the hands as well and they have mesh fins falls from the forearm.

Are you ready to transform into one of these lovely deep water creatures? This look will make you inspired to put together an amazing mermaid costume. So get liberal with your blue makeup, sparkles, and mysterious personality. You're sure to make waves in the happy-go-lucky mermaid community!