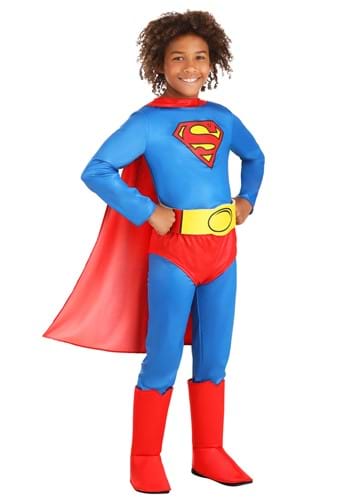 Last you checked, your child was not an alien from Krypton. As far as you're aware, they don't even have a distant Kryptonian relative. However, they catch more air than you'd expect when they leap from the couch. When they offered to help with the groceries and grabbed the bag filled with jars and cans, plus a whole gallon of milk, you warned them it was heavy.

But they lifted the items and practically skipped into the house like they were holding nothing. We won't even get you started about your child's speed. Essentially, Kryptonian or not, you may be raising the next super kid, and you should probably get them suited up to reveal their true character!

Prepare your kiddo for a lifetime (or at least playtime) full of adventure with this Classic Superman Kids Costume! The officially licensed ensemble has everything they need to transform into Krypton's favorite hero. The costume starts with a long-sleeved, blue knit jumpsuit with attached red foam boot covers. A printed "S" emblem on the suit's chest marks your kiddo super, while the covers transform socks or sneakers into classic hero boots.

Included red briefs pull on easy and stay secure with an elastic waistband. Meanwhile, a yellow foam belt with printed graphics fastens in the back with hook-and-loop closures. Completing the look is a 27-inch-long cape with Superman's "S" emblem printed on one side. The cape secures with a hook-and-loop fastener strip along its neckband.