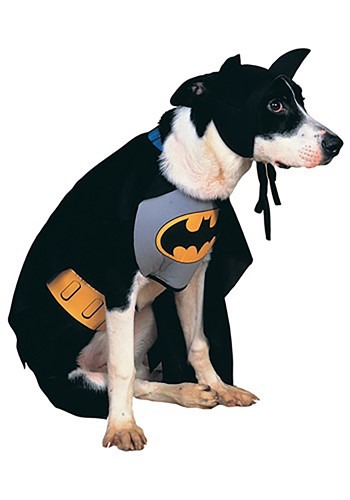 If you didn’t know Batman had a dog, then you portably also didn’t know that he had a son, and, well…we should probably catch you up on some stuff!

In Batman and Robin Vol 1: Born to Kill (as part of the new reboot of the DC Comics Universe), Bruce gets himself a black Great Dane from a kennel and later gives the dog to his son, Damian (aww!). Damian names him Titus, which is a great name for a dog (we also named one of our dogs Titus, just for the record. Which might make you wonder: Are we Batman’s son? Is Batman’s son writing this right now? We’ll never tell!).

If your canine is also a crime-fighting caped crusader, get him ready for his own adventures with this Classic Batman Pet Costume! Made of 100% polyester, the black Batman cape comes with two fabric ties, the grey polyfoam chest piece with the Batman logo ties together on the top and the bottom, and a yellow utility belt can be fastened with a black fabric tie. The costume even comes with pointed bat ears that tie around the head! Now your pup can look just like the Bat-Hound himself this Halloween, and all you have to do is teach him how to obey the Bat Signal (good luck with that!)!