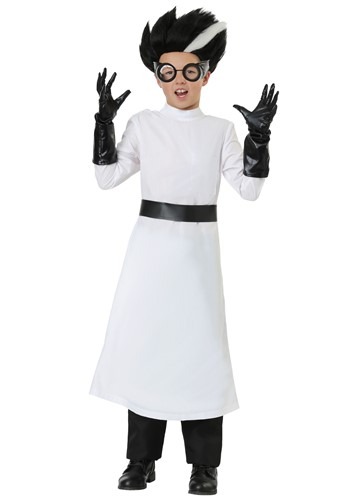 We think that’s pretty cool. After all, some kids think outside the box and it’s important to support your little one’s choice in career path. You can help your child turn their room into a secret lair. You can help them invent the next doomsday device. Why! You could even become your child’s number one henchman in their quest for global domination! But first, your little one is going to need an outfit befitting a mad scientist.

This child costume helps your young ones get in touch with their more… sinister tendencies! The costume comes with a jacket and a belt—everything a young mad scientist needs to get the ball rolling. The white coat has a front pocket, which can be used for carrying pencils… or test tubes filled with an experimental substance designed to destroy the world! Either fits. Top it off with all sorts of accessories from the rubber gloves that you might keep on hand under the kitchen sink to prop glasses. You could even top it off with a wild wig that suggests too much interaction with electricity. The sky is the limit!

Join in on the Madness

Now that you’re ready to accept your children’s future as a mad scientist, maybe it’s time that you joined them! You could help them construct a monster, fight superheroes, or you could even help your young ones conquer the entire world. If you’re looking for a great duo costume to pair with this one, be sure to check out all of our Frankenstein’s monster costumes!