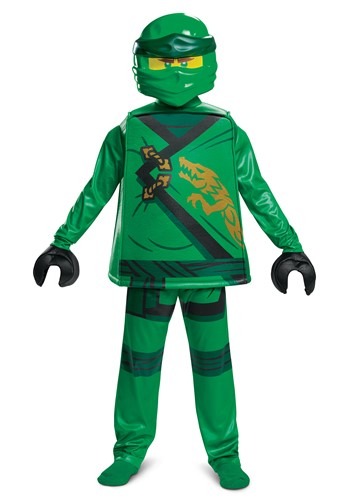 You know how sometimes you get into fights with your big brother, or argue with your parents? Well, Master Lloyd Montgomery Garmadon can definitely relate. After all, his dad, Garmadon, is literally the Lord of Destruction, while Lloyd is the Green Ninja, the Elemental Master of Energy and the leader of the Ninja. They're basically polar opposites. Talk about your awkward family reunions! Some family members might squabble over politics at Thanksgiving dinner, but Lloyd and Garmadon can end up in an all-out battle that threatens to destroy the balance of the entire universe.

Maybe you've had the tough responsibility of telling your dad that he's investing in a pyramid scheme, but Lloyd had to actually banish his dad to the Cursed Realm. (We're guessing his dad didn't give him a Christmas present that year.) That's a little worse than telling your dad that his turkey was dry or admitting you returned your birthday present because you just wanted money. And that's not the only time Lloyd and his father have been at odds. Lloyd had to send his dad to prison once after his dad turned into a totally evil monster version of himself. We're guessing that this family goes to a lot of therapy sessions!

Get ready for l-loads of fun with this Child's Lego Ninjago Lloyd Legacy Deluxe Costume. The costume looks just like Lloyd's ninja outfit from the Ninjango movie! It's 100 percent polyester and includes a foam overlay to keep the Lego-like shape, a printed green top with foil dragon graphics, green pants, a Lloyd mask and a pair of black Lego minifigure hands.

With this Lego Ninjago Lloyd Legacy Deluxe Costume, your little ninja will be ready for anything, whether that's battling Pyro vipers or just finishing his math homework.