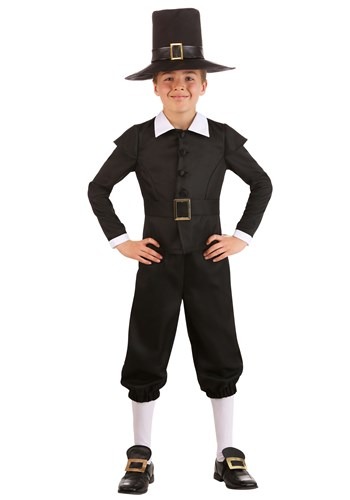 Folks have heard of all of the most famous colonies that were founded in the early days of settling the New World. But, there are a few that have gone down into legend. Among those, there are some tales that verge on the spooky and mysterious. Roanoke, the Lost Colony, for example. None know exactly what had happened and tales of it mysteriously vanishing from the world have sparked a ton of terrifying ghost stories, abduction tales, too!

Of course, not all those stories are of the horror variety. Some of the best stories we've heard of come from the Kiddo Colony. Now, we don't know what the first Pilgrims were thinking when they came up with the idea. But, they figured that they'd see what happens if the children ran one of the communities. They elected their own Munchkin Mayor and apparently most conflicts were settled with a food fight. That's why Thanksgiving was so important to them!

Bring the Kiddo Colony back from the mythical history when you let your tyke trot around in this Kid's Pilgrim Costume. This ensemble includes a gabardine jacket with fabric buttons and a pair of cropped pants designed to look in the style of the original colonizers. The tall hat features memory wire so it'll keep its stiff brim. Faux leather belts cinch the whole look together on both the jacket and the hat. Designed in-house by our Made by Us team, this look is sure to bring some smiles for Halloween or those fantastic Thanksgiving gatherings!

Make sure that you have a load of fun in any season when you bring a Pilgrim along. In fact, pair this costume up with a few more for a whole colony of the kiddos wearing pilgrim pride! Just watch out at dinner time that a good food fight won't be fixing any friction at the kid's table!