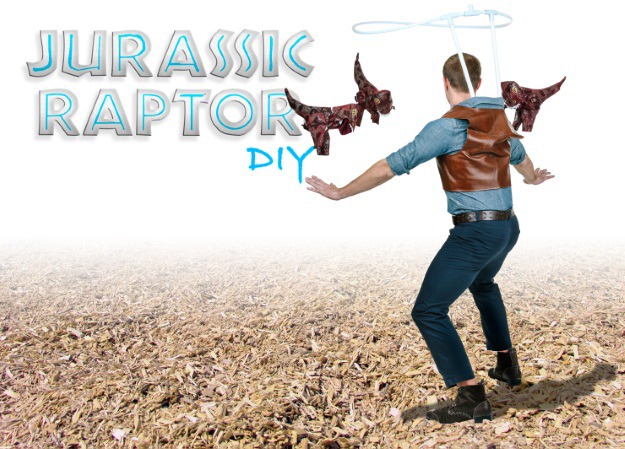 There were LOTS of memorable moments in Jurassic World. There was a lady that got eaten by a dinosaur that got eaten by a dinosaur (kind of like a human tur-duck-en), there was the guy who made sure to grab both of his margaritas in the midst of a Pteranodon attack, there was that strange cameo by Jimmy Fallon, and, of course, the scene that stole the show: raptor training with Owen Grady. When Chris Pratt's character stared into the eyes of three vicious Velociraptors, "BLUE, STAND DOWN," audiences were entranced. The raptor paddock scene was so memorable, "DELTA, I SEE YOU, BACK UP," that it even spawned a Meme now known as "Pratt-ing" or "Prattkeeping."

Jurassic World costumes are going to be some of the most popular choices for Halloween 2015, so if you really want to stand out from the [raptor] pack, give our Pratt-ing costume tutorial a try. "BLUE, WHAT DID I JUST SAY?" We've also included a simple tutorial on how to make this a couples idea, with a DIY Clare Dearing costume. Just remember, don't turn your back on the cage, and if something chases you, RUN! 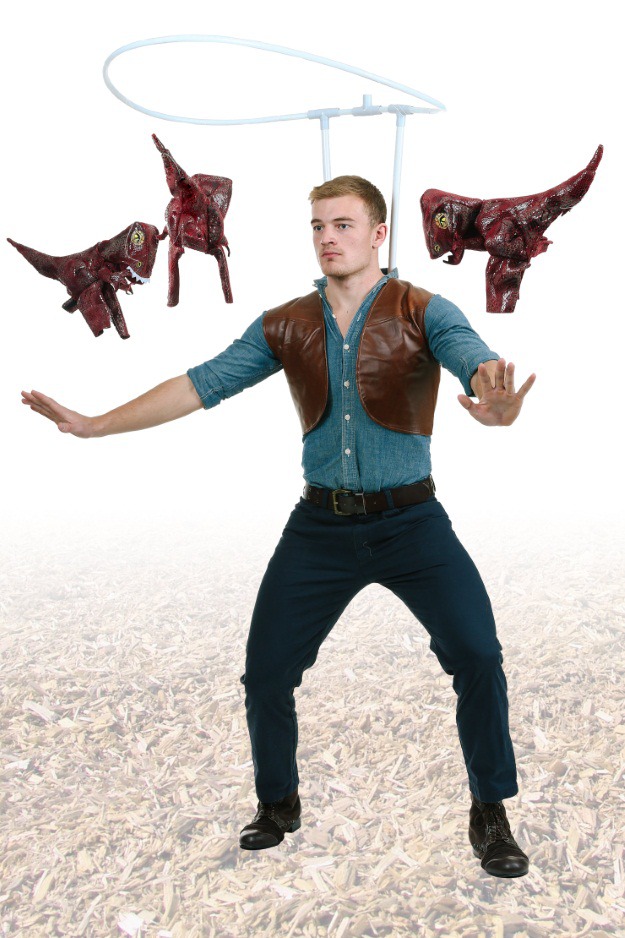 Until InGen successfully hatches baby dinosaurs in the real world, you're not going to be able to get your hands on three Velociraptors to use for this costume, so you'll have to go with another option for assembling your raptor squad. One idea would be to grab three friends, stick them in these dinosaur masks, and CIAD. Short three friends, however, we opted to cook up a "raptor mobile" for one! It may look a bit complicated, but all you need is the harness and plastic piping from our shower costume, fishing line, and a few raptor costumes originally intended for dogs! 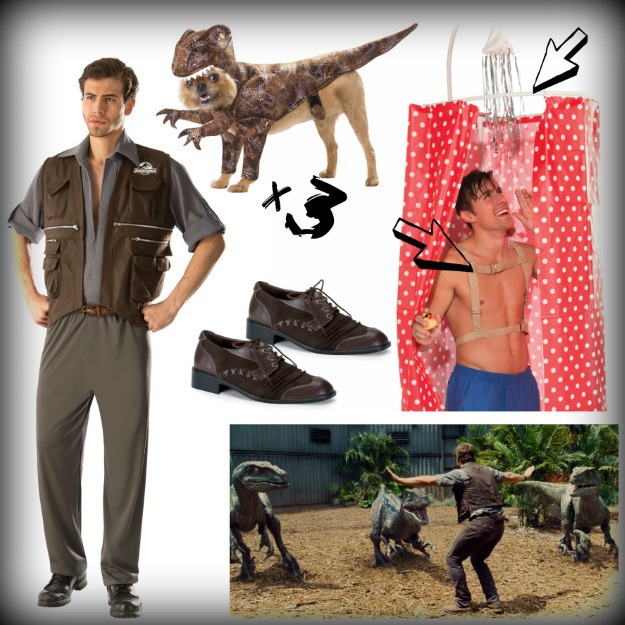 Our shower curtain costume includes a flesh-tone harness and tubes that are easily snaped together to form a hoop. All you need to do is snap off the shower head portion, and seriously you're almost done! We stuffed the three raptor pet costumes with some tissue paper to keep them as light as possible while still giving them some body. Then, we secured each raptor to the hoop with fishing line. You'll probably need some assistance helping you into the rest of the costume once you're strapped in, but then you're good to go! Shouting things like, "BLUE, STAND DOWN," is a must throughout the evening. So is ducking through doorways. 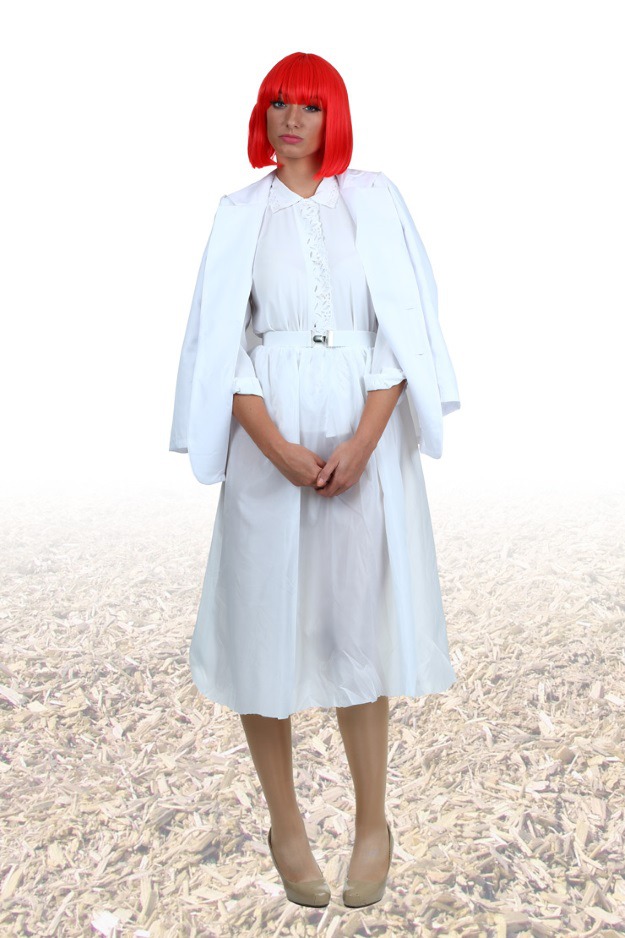 Anyone who has had a job "working for the man" can identify with Clare Dearing's need to go along with what the "suits at corporate" say. But when "corporate" tells you to invent a genetically modified, man-eating, prehistoric super predator just to up the 'wow' factor at your theme park, you may want to consider updating your resume, you know, just to see what else is out there. #JustSayin. Anyway, like her or not, Clare's wardrobe and hair were rather stunning, and they're quite simple to replicate for a quick Halloween costume! We know, "don't wear white after Labor Day," but if you ask us that rule is dead. Then again, so were dinosaurs... 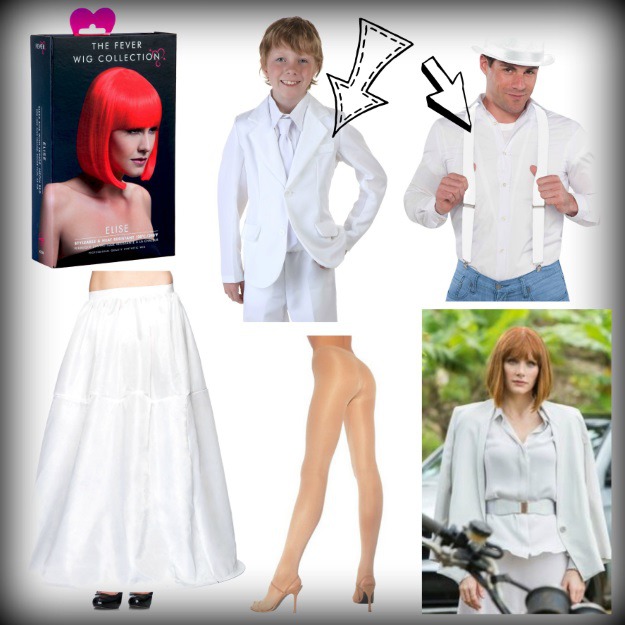 The wig is probably the most signature part of Clare's look, and our bright red bob does the job perfectly! After that, you'll want to layer on several pieces of crisp white clothing. We simply shortened the hem of our long white hoop skirt with a pair of sharp scissors, and topped off the ensemble with the white blazer from our children's white suit costume. (Where else are you going to find a smart blazer for under thirty bucks??) We lopped off one of the straps from a pair of our white suspenders, and used it as a waist belt. Lastly, don't forget the finishing touch: a pair of nude heels. For what better footwear than that, to run from a thousand-foot Indominus Rex? 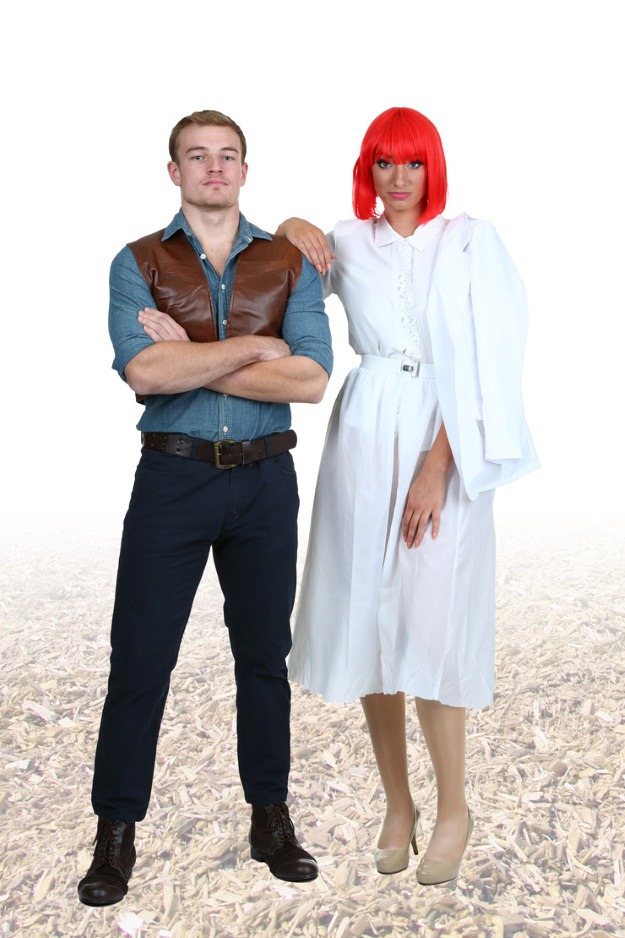 Nothing strengthens a fledgling relationship like fending off prehistoric predators and fighting for your life!

Jurassic World is a film rife with one-liners, so have your favorite quoatables prepared if you choose to head out on town dressed as these two trendy characters. You can even give the quotes a Halloween party twist: "You just went and made a new dinosaur cocktail? Probably not a good idea." "What happened to the sibling candy? She ate it."

Will you give this hilarious "Pratt-ing" costume a try, or do you prefer a more demure costume like Clare? What's your favorite Jurassic World one-liner? Let us know in the comments below. If you're more of a T-Rex and you don't want to be fed costume ideas, you want to hunt, then you can view our entire selection of Jurassic World costumes and accessories HERE!