by Marlon Heimerl|June 29, 2015
Categories: Movies, Superheroes, Then and Now 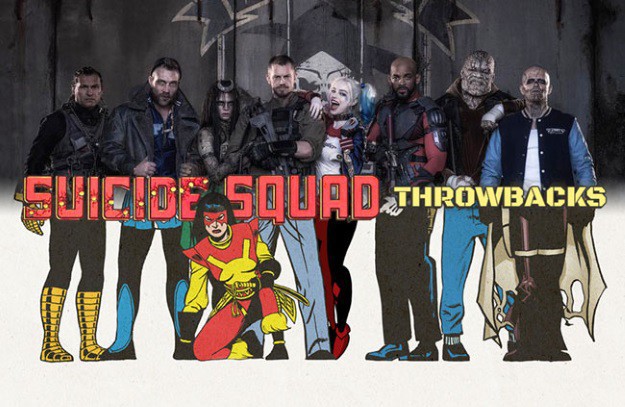 Is it just us or is the buzz surrounding Suicide Squad something extra-special? Sure, there have been a few examples of other movies creating this kind of excitement so far out from their release. But 2016’s highly anticipated anti-hero film seems like it's been hard to miss if you’ve even spent only a few minutes trolling the geekosphere in recent months.

The attention around David Ayer's upcoming film, which is set in the DC Comics universe, started with the “leaked” images and a meme stampede in the wake of images of Jared Leto’s tattoo-laden Joker. That was quickly followed by an all-around collective gasp at the unveiling of Margot Robbie as Harley Quinn.

Then the rest of the star-studded cast, including the likes of Will Smith, Ben Affleck as Batman, and Cara Delevingne, just kept feeding the buzz and here we are today. Here to feed the beast some more!

Use the slider below to compare the original, very first appearances of each character from the Suicide Squad to their likeness from the upcoming movie. We've got 'em all, not just Harley and the Joker, but all nine of the supervillians. The concept is simple, but powerful – so enjoy this walk down memory lane as we look into the future!

Embed the slider on your site.

Does this kick your excitement level for the film up a notch? Can you tell that we're MORE THAN READY for this film?! Let us know what you think about this comparison - which version of the characters do you like better? Are they upgrades or is the original always best? We have some DC Comics shirts to browse through while you make up your mind.