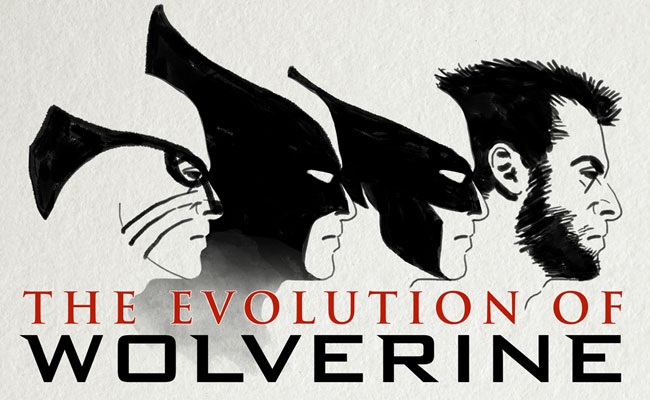 This coming July 26th, we expect the highly anticipated film The Wolverine to take box offices by storm. Get it? Storm? Whether or not you plan to grab a ticket and see those adamantium claws slash up the silver screen, we hope you enjoy our visual guide to the evolution of Wolverine's celebrated costume!

This guy has answered to many names over the years, so it is only fitting that he has a similarly high number of costume incarnations, right? (Seriously though: Weapon X, Patch, James Howlett, Logan, Death...the list goes on!) 'Marvel' at the style journey of this infamous member of the X-Men as it moves from whiskered, to fanged, to spandex, to leather, to no shirt at all! (Bad boys don't have time for shirts.)

Which look is your favorite? Tell us all about it in the comments section!

The Evolution of Wolverine

In his nearly 40 years of existence, he's also worn many costumes. Below is a progression of every costume he's ever worn while going by the name "Wolverine."

Wolverine first appeared in The Incredible Hulk wearing a costume designed by John Romita, Sr. His original mask featured a black nose and whiskers. Co-creator Len Wein originally intended his claws to be attached to his gloves.

Wolverine joined the X-Men in Giant-Size X-Men #1. The Legend goes that Gil Kane drew Wolverine's mask wrong on the cover, giving him taller Batman-like ears and blank eyes, and series artist Dave Cockrum like it so much that he redrew his pages to match.

Cockrum's final issue was Uncanny X-Men #107, and he thought it would be amusing to leave the next artist a new Wolverine costume that would be "a bitch to draw." New Series artist John Byrne wasted no time convincing his editor that they should revert it back to the Classic Yellow.

However, Byrne wasn't a big fan of the bright yellow costume either, and was eventually allowed to introduce his own redesign in Uncanny X-Men #139. A year earlier he'd removed the flesh-tone sleeves from Wolverine's arms, making his arm hair visible even in costume.

for the first year of his new self-titled ongoing series, drawn by John Buscema, Wolverine wore a stealthy black costume and face paint. Over in Uncanny X-Men he continues to wear the Brown costume.

During a story arc drawn by star artist Jim Lee, the X-Men donned identical blue and gold outfits inspired by the original 1960s black and gold uniforms. Wolverine reverted back to his Brown costume just in time for the launch of X-Men #1.

After series writer Chris Claremont left, John Byrne briefly returned to co-write with artist Jim Lee. One day Lee proudly mentions that he'd just given Wolverine his "real" costume back. There was an awkward pause when Byrne informed him that the Brown costume had been his idea.

In X-Men #25, Magneto ripped the adamantium out of Wolverine's body. Thankfully, his bones had only been laced with the metal rather than replaced entirely. it was soon revealed that he'd been born with bone claws, though without the metal they were no longer unbreakable.

After a year and a half of bone claws, fans were starting to get anxious. Finally, events were set in motion for his adamantium to be replaced in Wolverine #100. In a cruel twist, his body rejected the bonding process and he was transformed into a noseless beast instead.

Noseless Wolverine soon began wearing a bandana over his face, as if that looked any less ridiculous. Fan reaction was so negative to the storyline that his transformation was quietly swept under the rug after less than a year, and never mentioned again.

While remaining true to the spirit of the character, the movie version of Wolverine in Bryan Singer's X-Men differed slightly from the comics. Most noticeably, his claws were moved so that they exited from between his knuckles rather from from the back of his hand.

Also, while Wolverine was traditionally portrayed as being 5'3" in the comics, Hugh Jackman stood nearly a foot taller at 6'2". The color scheme of his battle uniform was reversed from eh comics to black with yellow highlights, and did away with the mask.

An animated series titled X-Men Evolution followed the movie later that year. Wolverine's Evolution outfit took inspiration from the Brown costume, but with a more angular design, strappy boots, and an orange and black color scheme.

As if three different Wolverines weren't confusing enough (comic, movie, and Evolution), Marvel created a fourth. Ultimate X-Men was a part of a rebooted line intended for new readers. His design was another variation on the Brown costume, but with a color scheme based on Fang.

Grant Morrison and Frank Quietly's New X-Men brought the team more in line with the movie by giving them new black leather outfits. Wolverine's uniform was a combination of the movie's costumed and civilian looks with an unzipped jacket.

Season three of X-Men Evolution introduced a new, darker costume. Like in the movie, the animators settled on black with yellow highlights and got rid of the mask.

Within a year, Ultimate Wolverine adopted a variation of the Evolution costume. The main difference was a set of inverted stripes on his shoulders and a belt that changed depending on the artist who drew it.

Although he continued to wear the Astonishing outfit elsewhere, Wolverine donned a black stealth costume on covert missions in X-Force. The costume was based in part on both the old Brown and Black costumes.

Wolverine's first solo movie did away with costumes entirely. While he still sometimes wore the leather jacket in the film, promotional material for X-Men Origins: Wolverine mainly depicted him in just a sleeveless shirt.

In the same way that the first movie ditched the jacket, the posters for The Wolverine show him completely shirtless. We're sensing a pattern here...

Which Costume Had the Longest Run?

2015 Update: If you’re interested in wearing anything like this for Halloween, check out our range of Wolverine costumes as well as our guide to DIY Wolverine and alternate Logan ideas!