So it looks like you have finally decided to embrace your inner geek and make your way down to the nearest comic book/horror/sci-fi/”Star Trek”/action figure/gaming/”My Little Pony”/baseball card/anime/nostalgia/steampunk/any combination thereof convention. Good for you!

Since this is your first time attending something like this, you should know that there are a few rules by which you should abide so as to not be overwhelmed, overheated, over-exhausted and overspent by the end of your weekend. This is going to be one of the few times in your life that you will find yourself surrounded by people who are into a lot of the same things that you are and everyone will all be there to indulge in something that makes them happy regardless of how strange it may seem to people on the outside looking in.

Seriously, you’ll be doing something that you enjoy; don’t let anybody take that away from you.

So in order to best enjoy yourself over the time at the convention, keep in mind these following tips:

#1. Wash yo’ Hindquarters – while you’re at it, hit your forequarters and fivequarters

This might seem like a no-brainer, but you’d be surprised. Many conventions are held during the summer months and if you’ve been anywhere near the light of our horrible, horrible sun in the last couple of weeks, you know that it’s ridiculously hot out and America has literally been on fire. Couple this with the fact that you will be crammed into a tight space with thousands of other people in a convention hall that is too large to be properly air conditioned and the stink-growth becomes exponential.

Listen, I know how great a time it is to spend all night partying with “Magic: The Gathering” players – those guys are crazy – and trading neon colored shots with the Bronies, but sometime between passing out at 4 a.m. and traversing the convention floor at 9 a.m., you need to shower. Not just for yourself, but for the people with whom you will interact. Do you think that William Shatner will want to discuss proper Bat’leth fighting techniques while you smell like a Klingon Sasquatch? I don’t think so.

During the convention, you will walk about 43 miles per day and lose 12 pounds of sweat per hour. Therefore, you’re going to need to drink water throughout the day. If you’re smart, you’ll have brought a water bottle that you can refill throughout your time on the convention floor. If not, be prepared to spend anywhere between $2 and $5 for a single bottle of water.

Some places know they can make that kind of money on concessions and won’t allow outside food and drink. If you’re lucky and the convention is held in a hotel and you happen to have a room booked, then getting a package of bottled water at a grocery store and stashing it in your room will save you a ton of money. Yes, you might lose a bit of time on the convention floor, but if you time it so that you’re also overloaded with swag then you can kill two birds with one stone and take a nice break from being on your feet.
If you hydrate throughout the day as well as when you’re out with various people from the con during the night – that includes having water with your drinks in the evening – then you’ll have all the fuel that you’ll need to make it through the entire convention without suffering from dehydration or worse. 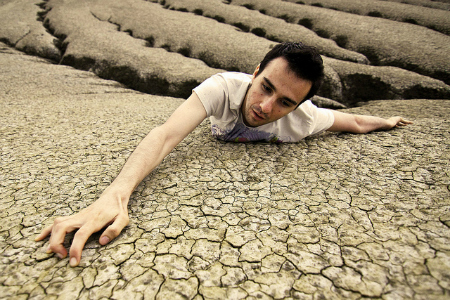 Pictured: You, but you’re probably wearing a “Star Trek” uniform.

So far, all of my advice has had to do with survival and being considerate to your fellow con-goer. This will be no exception. However, it’s time to inject some fun into this.

Dressing appropriately could have a couple of implications here. The first is that you should dress for the event in comfortable clothes, a decent pair of shoes and possibly even carry a backpack (not an “I’m going to backpack through Europe for a year or so in order to find myself” kind of backpack) for some of your stuff.

You know what though? You don’t want to dress appropriately like that! It’s time to let your inner nerd become your outer nerd. It’s time to cosplay as your favorite character! There might be a website somewhere that can help you find the essential accessories and even full costumes to become your favorite character. I’m sure one is on the internet somewhere. If only I could remember what that website would be…[ed. note: He means this site. The one you’re on right now. We’ve got costumes for all your needs.]

When it comes to cosplay, dressing appropriately means something quite different from the rules above. If you’re going to go in costume, it’s your job to look like whatever character you so choose, so keep in mind what you normally look like. You don’t want to end up on one of those cosplay fail blogs. Also, remember that each convention might have its own rules regarding costumes. Some conventions out there do not allow weapons, including prop weapons, or have rules regarding the amount of skin that can be shown in costume. Therefore, before you show up dressed as Ivy from “Soul Calibur”, you might want to check if it’s within the con’s guidelines. 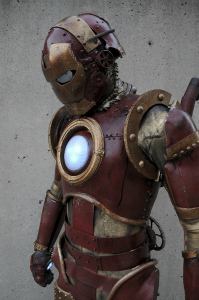 I’m sure you can understand why you should always be Steampunk Iron Man now.

The general rule for attending any convention is that you’re going to leave with a whole lot more than you came in with (with the notable exception of money). As a result, you’re going to need a place to put stuff for your return trip. If you’re traveling in a car with three or four other people, there is only going to be a certain amount of room for what you can bring back with you. A life-size C-3PO may sound like a good idea – because it is! – but unless he can ride in back comfortably, there might be an issue.

This problem can be even more pronounced if you ended up flying across the country to attend a convention. In this case, be prepared to pay to check your bags on the flight but leave a ton of room in your suitcase. I’m talking like only having two sets of clothes in a suitcase that holds 6 cubic feet of stuff. The extra room in your suitcase can be used to put in some of the less valuable or more durable items that you acquired during your stay, while anything that is fragile or extremely valuable should stay with you as carry-on baggage.

Some vendors are able to ship purchases made at the convention to your home, so if you don’t know if you can get it home, see if delivery is an option.

This is one of the most important parts to attending any con: how much money to bring and how to get the most out of it. If you follow these rules, you’ll have enough money to survive in your day-to-day life. Keep in mind that in my world, survival means being able to afford one package of 12-cent ramen and three bottles of Mad Dog 20/20 every day. So you know, grain of salt.

Did I mention that I live under a bridge and collect tolls from frightened peasants? That might explain some things about my life.
First of all, set a spending limit. Now add about 20% to that, because that’s going to happen when you see a limited edition Batman figure after you’ve already gone over your spending limit by $30. Can you actually justify spending that much before factoring in necessities like your hotel room, gas station hotdogs and bum wine? If so, then you won’t have your partner or roommates wanting to murder you because you spent all your money getting autographs from the cast of “Hostel III” (yes, that does exist) instead of paying your share of the cable bill this month. Now nobody can watch “Breaking Bad”. That’s grounds for justifiable homicide in Texas. True fact. 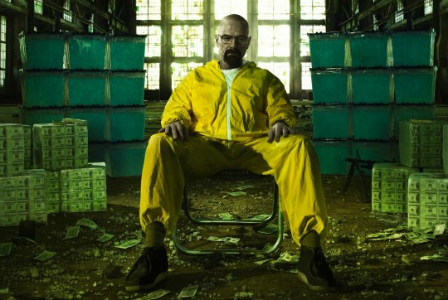 Best show ever or best show in the history of ever? Discuss.

Now make a list of things that you know you want. If these items are not exclusive to the show, take your time and try to find the best deal on them. In fact, look at the prices that people are asking on the internet so you know what a fair price is. In addition, many items will probably be offered by different vendors at the convention, so unless you’re looking for something exceedingly rare, it may be in your best interest to look around before purchasing anything.

My final piece of money advice is to bring cash and haggle on the last day of the convention. If you’ve got everything that you wanted and still have some money left over, that last day of the con is going to be great. Many vendors would rather get rid of some items at a slightly lower rate than have to pack them up again at the end of the day. If you show up with cash in hand, ready to make a deal, you’ll come home with a box full of 25 "Predator" action figures and a “Creature from the Black Lagoon” diorama!

On a completely unrelated note: is there anybody out there interested in 21 "Predator" action figures? 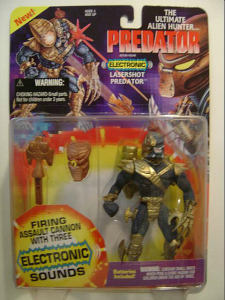