What's your favorite part about attending a Halloween party? Is it the fun and freaky food? What about inventive party games? Many of us enjoy a classic Halloween costume contest. There are so many cool and inventive costume ideas out there, and sometimes we're absolutely blown away! If you're looking at hosting your own Halloween party, we thought we'd help you out with some free, printable costume awards. Keep reading to see a list of Halloween costume awards your guests could win for the night! 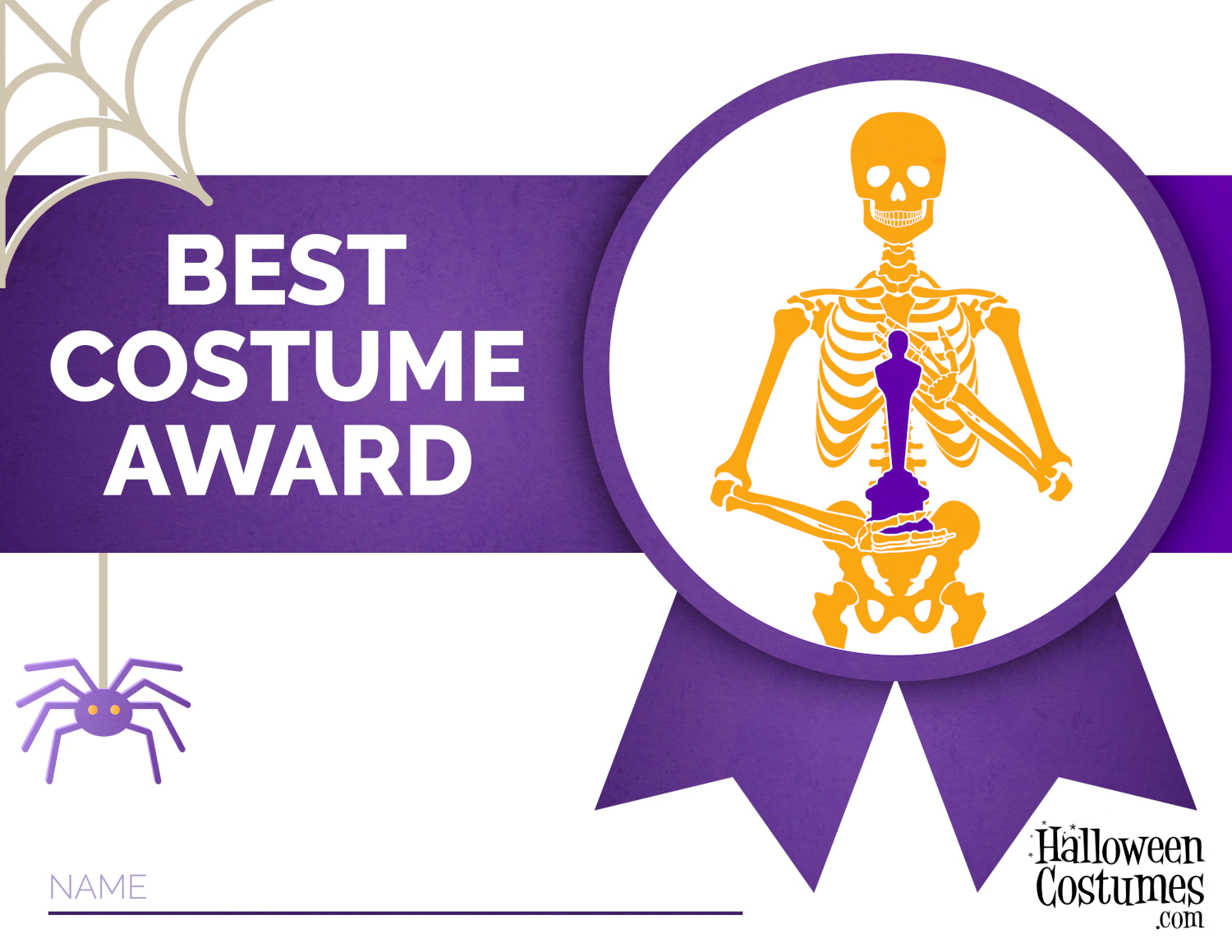 It's bonely at the top.

Have you ever been wowed by someone's costume? Maybe they should be cosplaying at Comic-Con because they look like they stepped out of the silver screen. Perhaps their outfit is incredibly historically accurate and made with extreme care. You know what we're talking about! These people went above and beyond, and this is why they deserve the best costume award. 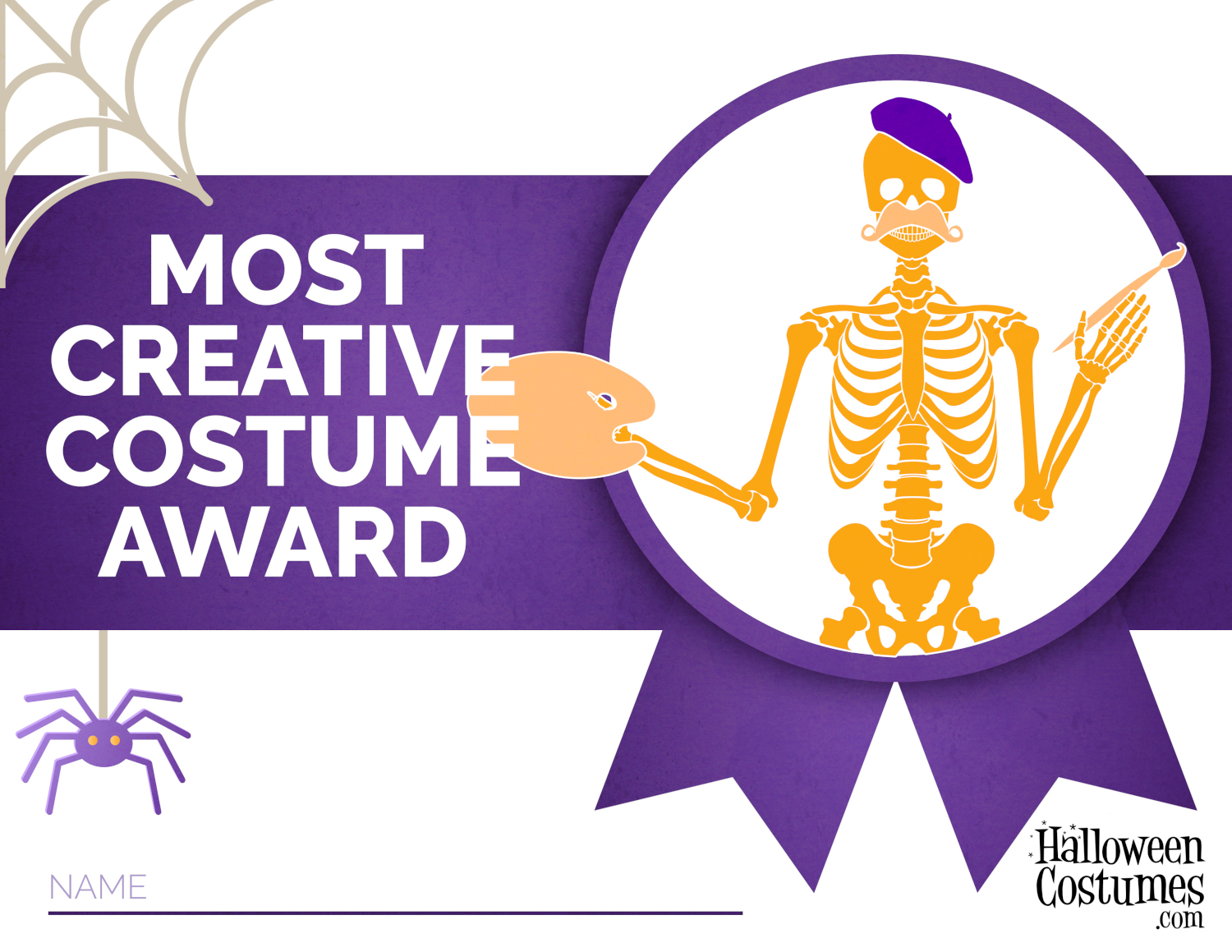 It takes real skulls to create a costume like yours!

There are tons of ways to interpret "creativity" in a costume, whether it's a character you weren't expecting to see or perhaps a mashup of ideas. Whatever the case may be, it's nice to know that all your efforts were appreciated! Find the most creative costume at your Halloween party and give them this costume award. 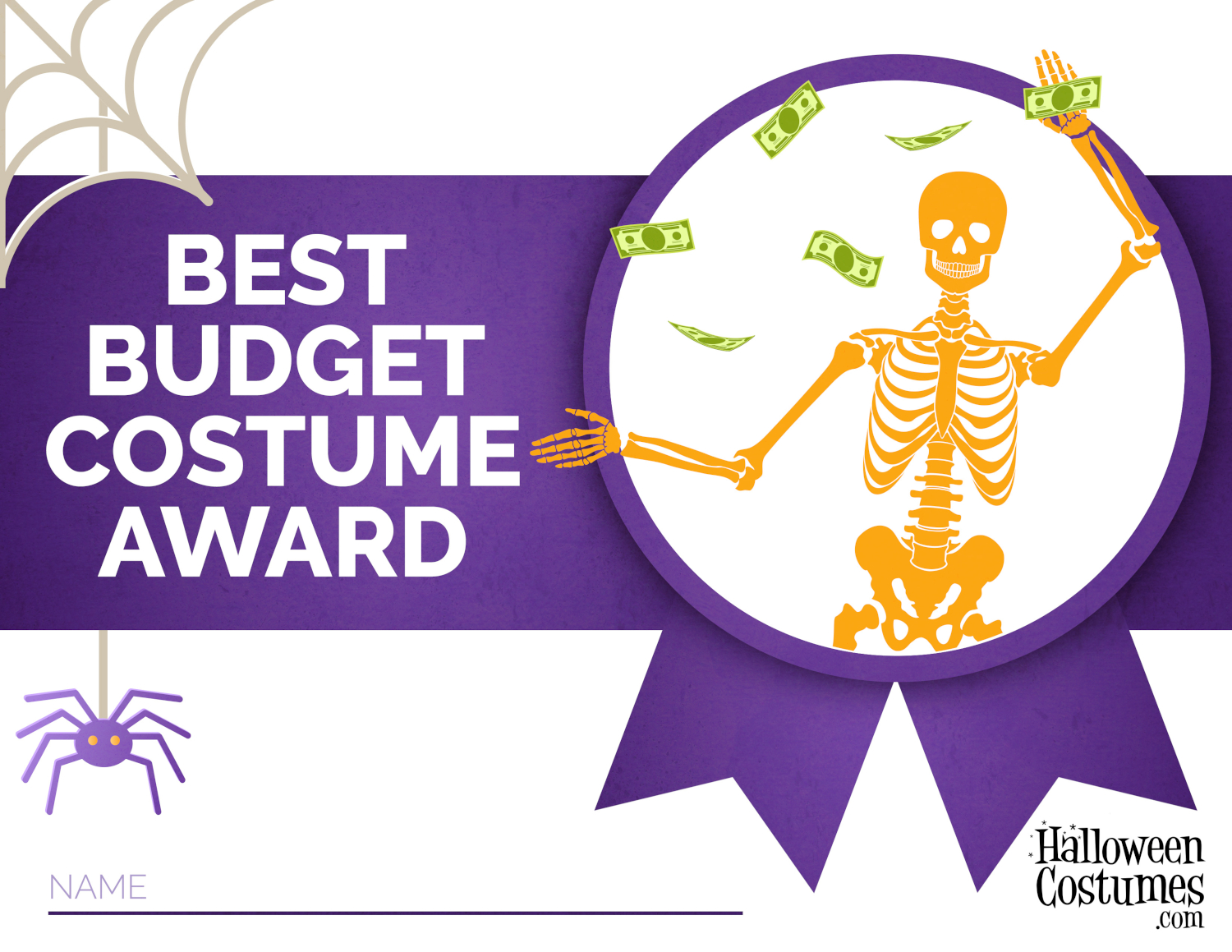 Not everyone has the time, talents or the dough to pull off an incredibly elaborate Halloween costume, and that's okay! There are multiple ways to stand out at the Halloween party, and we're here for you. Maybe someone has an incredibly clever closet cosplay, or their costume is hilariously made of common household goods. (A knight costume made of paper chain chainmail? Yes, please!) Whatever the case may be, they deserve this award for the best budget Halloween costume. 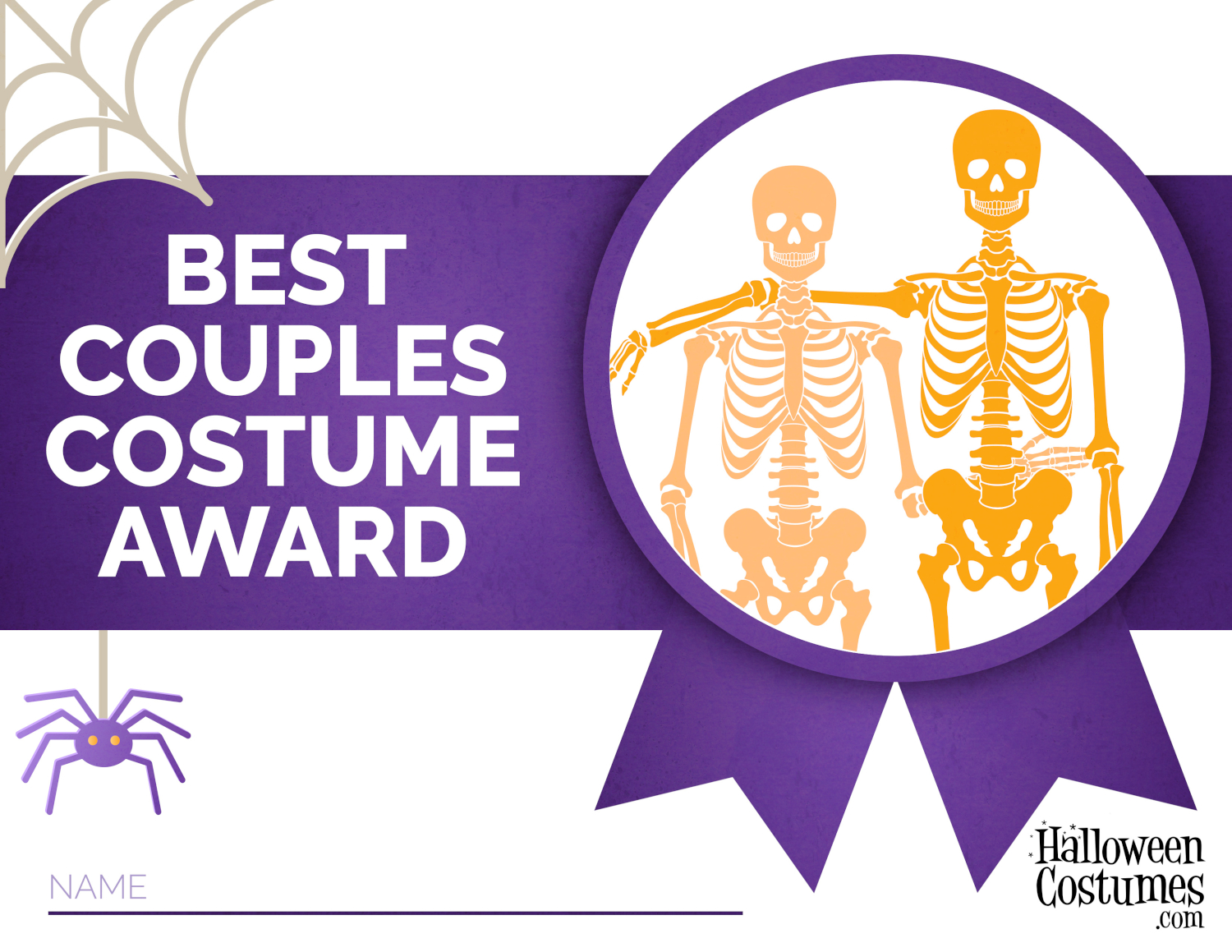 It takes two to tango, and it takes two to earn this Halloween costume award! We fully admit that some characters and costume ideas are just better in pairs. Bonnie and Clyde, Mario and Luigi, salt and pepper—you get the idea. Find the most clever couples costume at the party and be sure that they get this printable costume award! 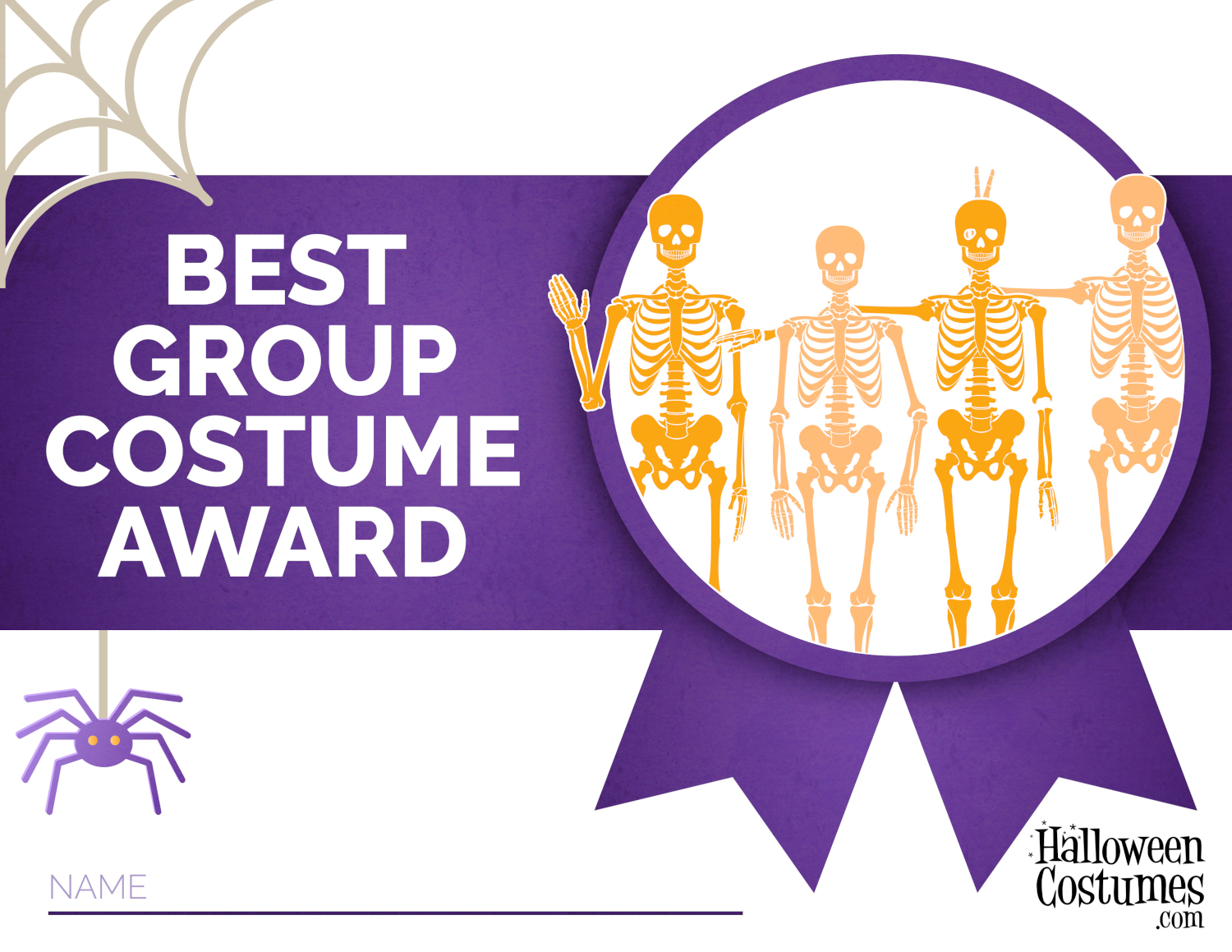 Tibia honest, we're all jealous of your dedication!

Whether you're dressing up as a family unit or a group of friends, it takes a lot to coordinate a group of 4 costumes...or even a group of 5 or 6! Is your group costume even bigger than that? Color us impressed, so much so that we made a group costume award just for you. Make sure to take plenty of pictures because everyone will want to savor the moment. 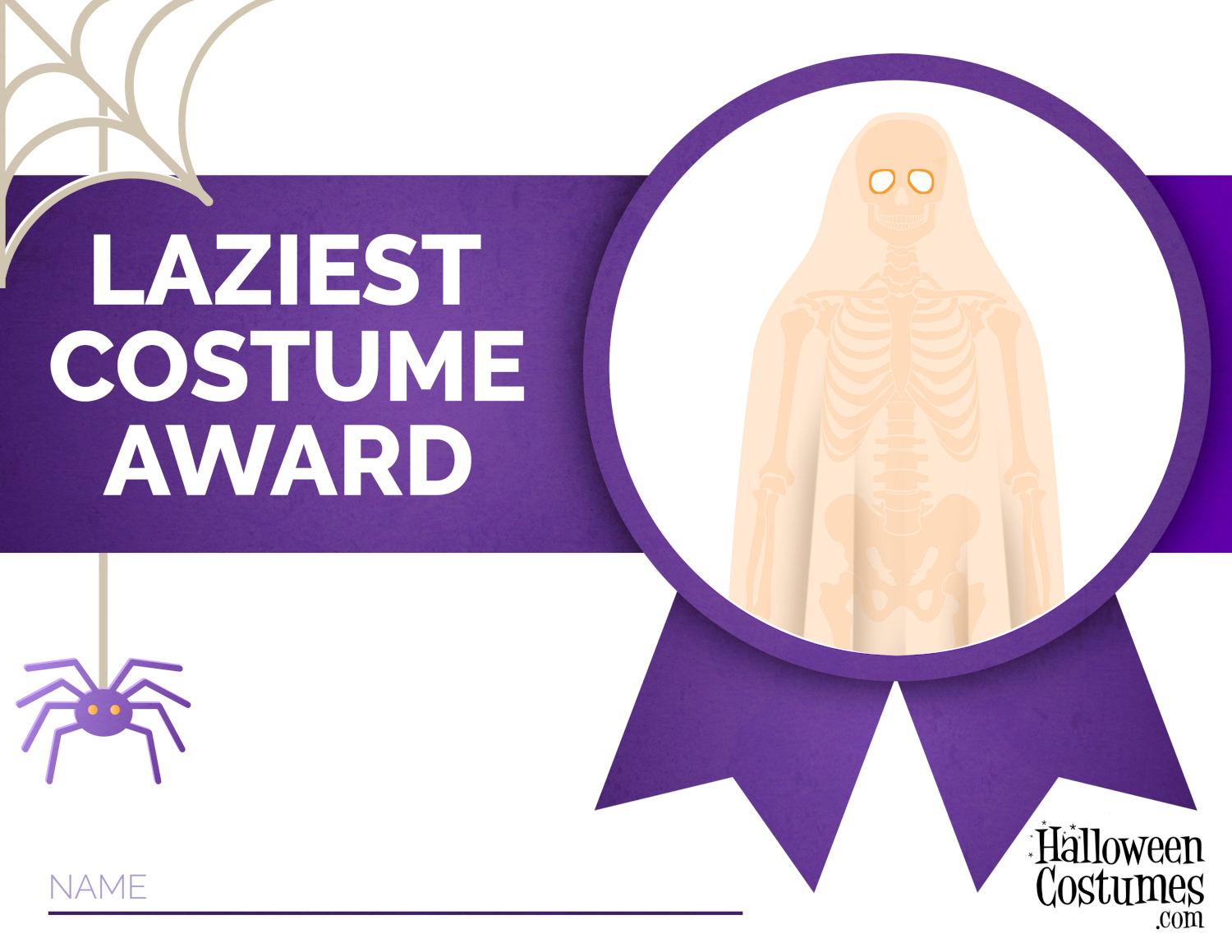 Back to the jaw-ing board.

There's always that one person who shows up wearing a shirt with a sticker that says "Hello, this is my Halloween costume" or something to that effect. Maybe they're doing the classic sheet ghost costume. At least they made an effort to come to the party, but they totally deserve this lazy costume award. 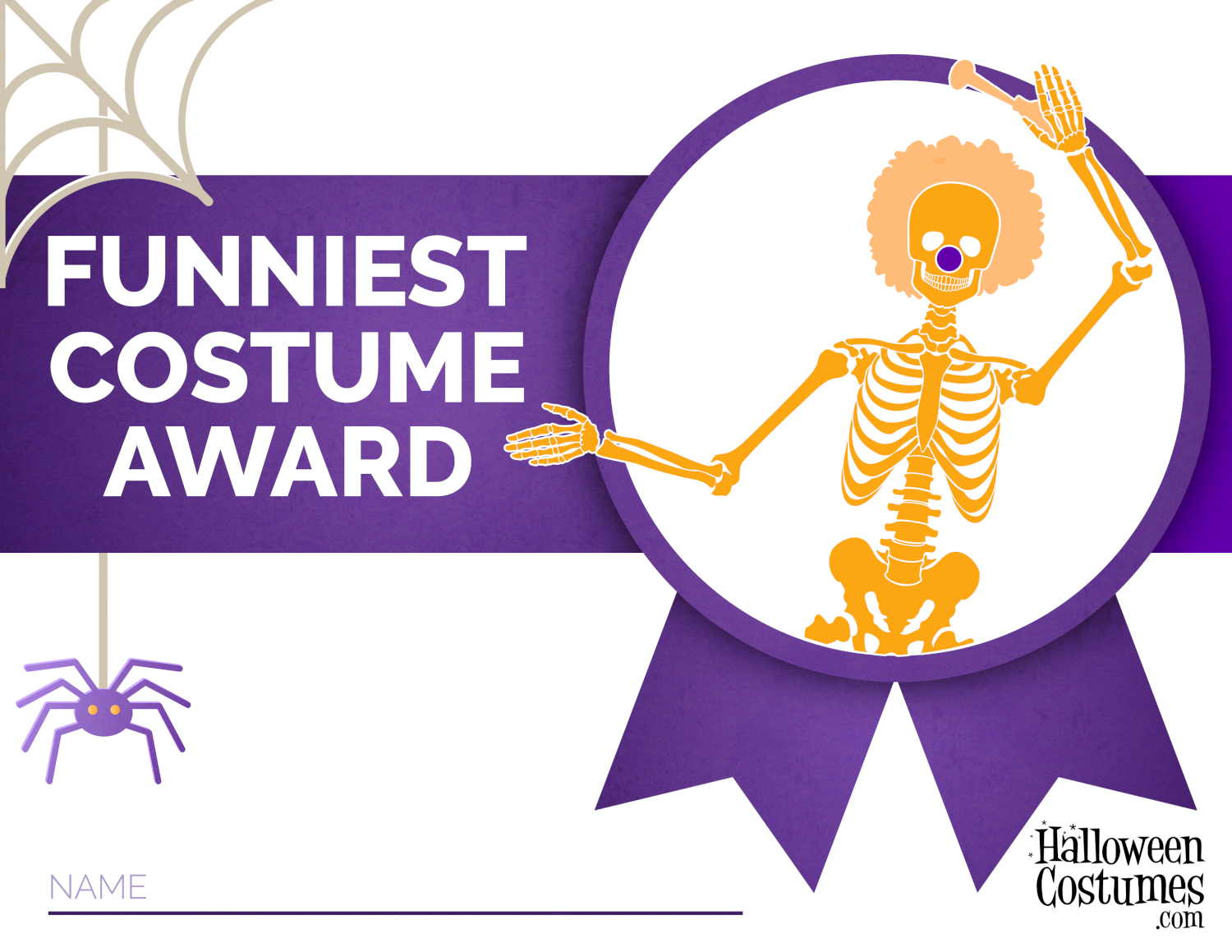 Your costume tickled our funny bones.

There's a 90% chance that this award is going to someone in an inflatable costume. But you're the one who gets to decide! Maybe a guest is rocking their Nacho Libre costume and throwing out lines like they were cast in the movie. Or they recreated their favorite 80s school photo in costume form. If their costume seriously made you laugh out loud, then this award belongs to them! 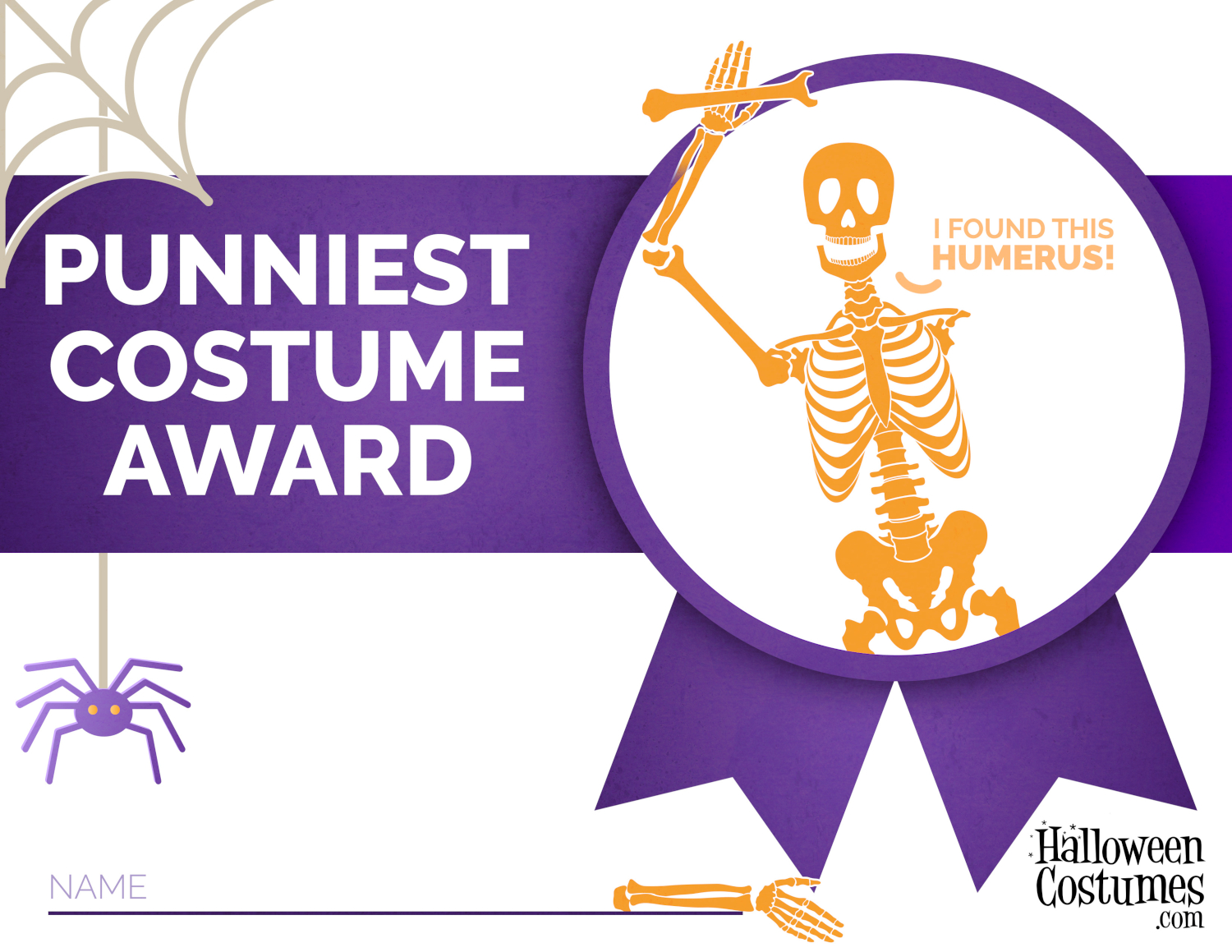 We found your costume humerus.

Pun costumes may not always be laugh-out-loud funny, or you may have to stare for a minute or two to get it. But once it sinks in, you know you're going to have to file that dad joke away for later use on the kids. Taco Belle, French KISS and smart cookie are all fair game, but it's going to all come down to who wore it best. 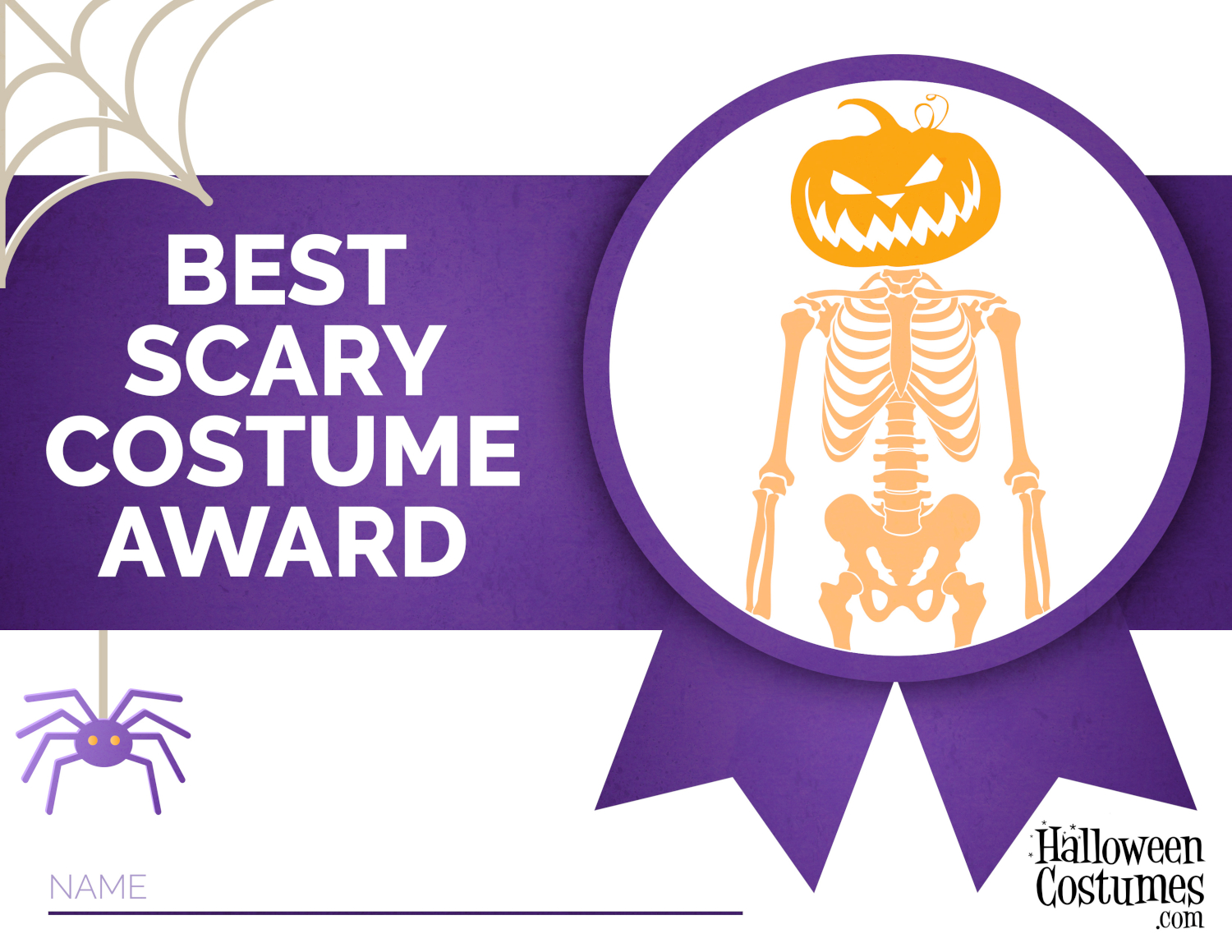 You sent shivers down our spine.

You're always guaranteed to spot a few horror movie costumes at a Halloween party, along with a generous smattering of monsters like vampires, werewolves and ghosts. But who managed to be the scariest? Did one of your guests create a horrifying monster from their own imagination? Maybe someone dipped into a more obscure horror movie character or took a scary clown costume to the nth degree. Looking at them in costume sends shivers up and down your spine—and in this case, that's a good thing!

Be a liver, not a hater.

While sexy costumes may be subject to scrutiny these days, if you want to rock what you got, we're here for you! You could be a fan of Jessica Rabbit. Perhaps you find sexy costumes funny, and you like to make unusual characters or items sexy. (Sexy Gandalf costume? We'd love to see your spin on it!) Sexy costumes are also not just for the ladies these days, so get ready for more competition! 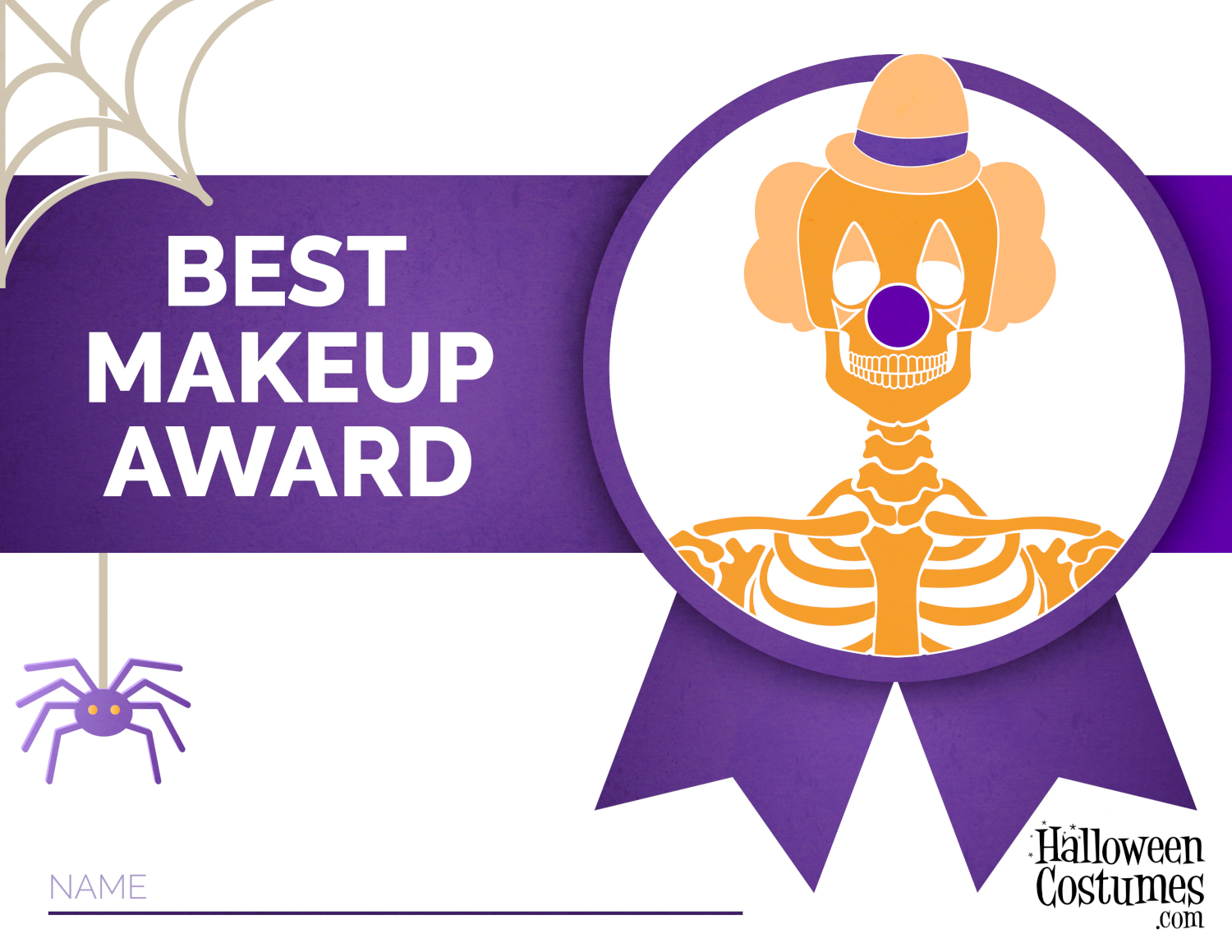 We're wowed by your makeup skulls!

Some costumes don't feel complete without makeup—clowns, zombies, werewolves, you name it! Some people even create custom makeup looks that go above and beyond to put their own spin on it. In some cases, their makeup may even BE the backbone of their costume. Find the person at your Halloween party and make sure they walk away with this costume before the party ends! 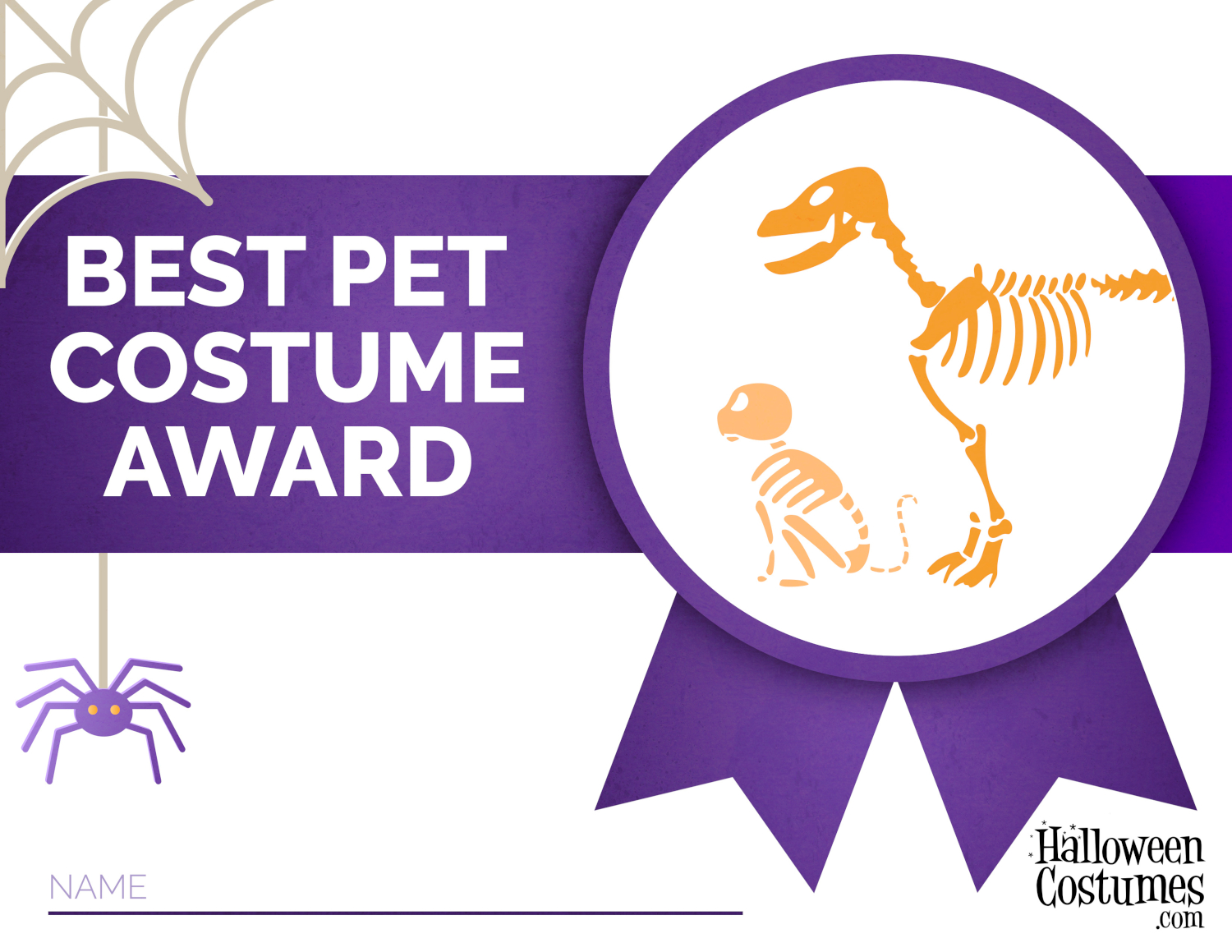 Pets may or may not be allowed at the Halloween party itself, but if you're organizing a costume contest, you can tell your guests to have their pet photos prepared. (Honestly, this will be the cutest category to judge, and probably also the most difficult.) The winner had better give their pet lots of treats to celebrate their win! 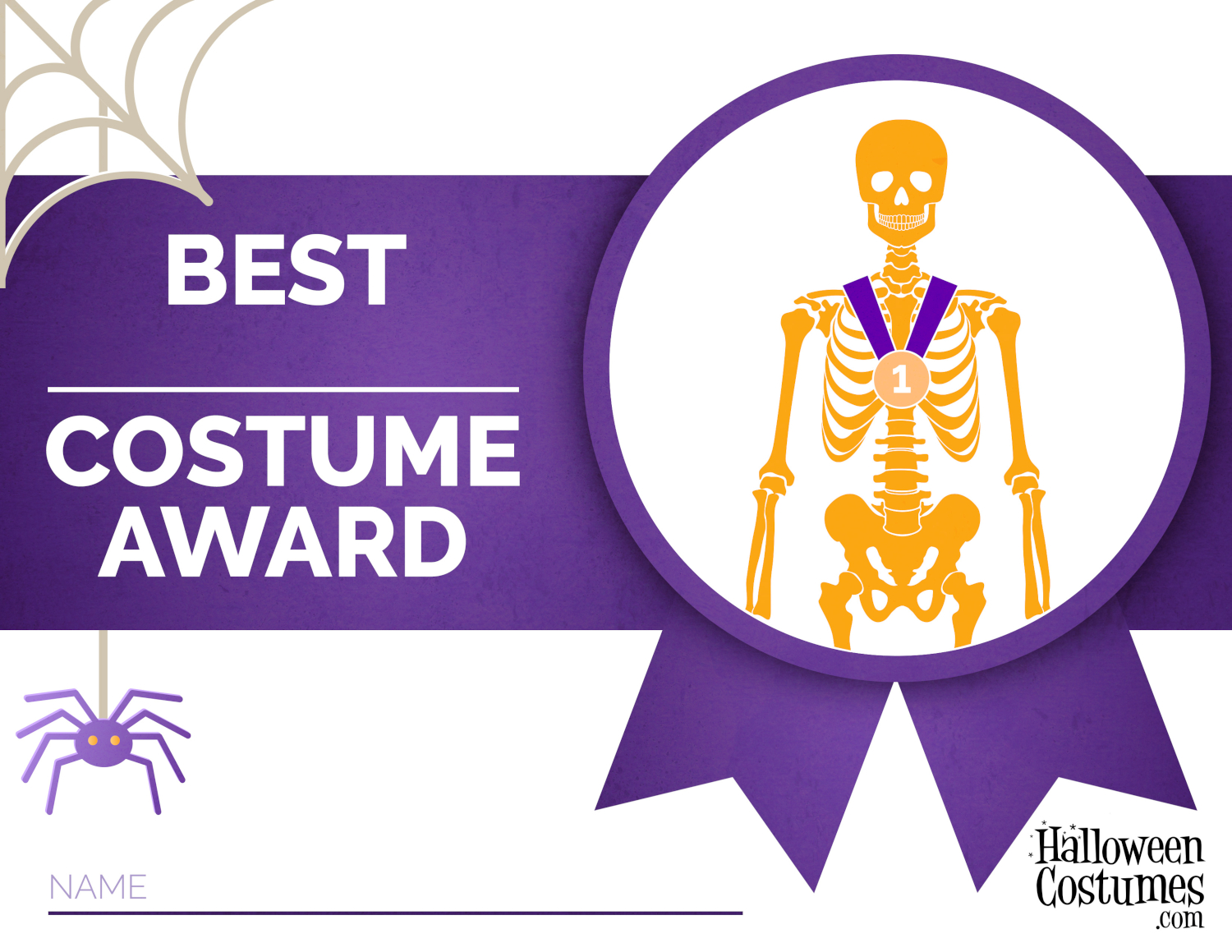 Because we all knee-d room for more!

We thought this list of Halloween costume awards was pretty exhaustive already, but here's a fill-in-the-blank award just in case you have other great ideas. Or maybe you want to give out some honorable mentions so that no one goes home empty-handed. Make as many or as few of these awards as you'd like!

If your Halloween costume contest is a democracy, then you'll need some tickets for voting! You can cut them apart for voting or hand out the whole sheet. This is your costume contest and you get to make the rules!

For easy printing, use these PDFs to print as many or as few of the award pages and voting tickets as you'd like! Or go completely paperless and email or message your friends with the images in this blog. Do what works best for you, but don't forget to have fun!

We must bid you bone-jour, but we hope you had fun checking out all of our cool Halloween costume awards! Are you planning to host a Halloween party this year? What do you look forward to the most? Any party with a costume contest sounds like a blast to us, but don't forget to make sure you have all the Halloween decorations you're going to need for a real monster mash!