DIY Alvin and the Chipmunks Costumes 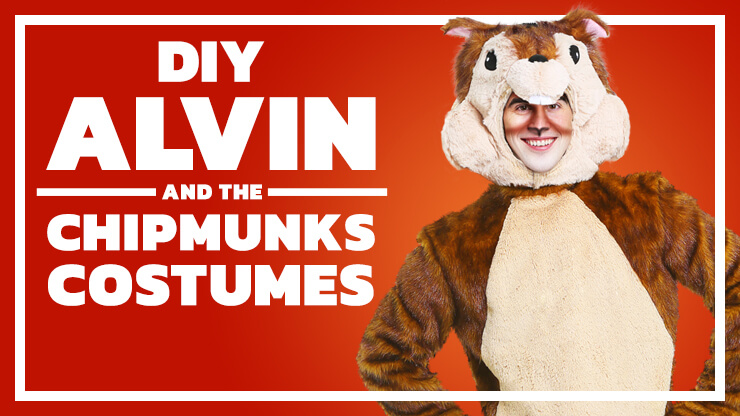 Animals have ruled Saturday morning cartoons for decades. Bugs Bunny, Mickey Mouse, Scooby-Doo—the list goes on! If you're on the hunt for a unique Halloween costume idea that hails back to the heyday of cartoons on TV, look no further than Alvin and the Chipmunks. The Alvin Show originally dates back to the 1960s, but the cartoon had a comeback in the 80s, along with a series of movies and a new cartoon show in the 2010s. Alvin and the gang have sported a few different looks throughout the years, but they all stick to their signature colors. (Which makes these DIY Halloween costumes easy to recognize!) Keep reading and we'll show you how to make your own Alvin and the Chipmunks costume, along with Halloween costume ideas for the Chipettes.

Easy, iconic and classic—what's not to love about an Alvin costume? Alvin's signature red hoodie is instantly recognizable, and this costume is easy to make. Once you have your chipmunk costume, you'll want to try on red hoodies to find one that fits over both you and your costume. Then it's simply a matter of getting the "A" onto the sweatshirt. This is easily done with a sheet of yellow iron-on vinyl, which can be bought online or in a craft store. Use your computer to make a letter "A" that fills an 8.5"x11" sheet of paper, and then use the paper letter as a template to cut the "A" out of the yellow vinyl. Just follow the directions for the vinyl and iron it on to the shirt, and your Alvin chipmunk costume is complete! 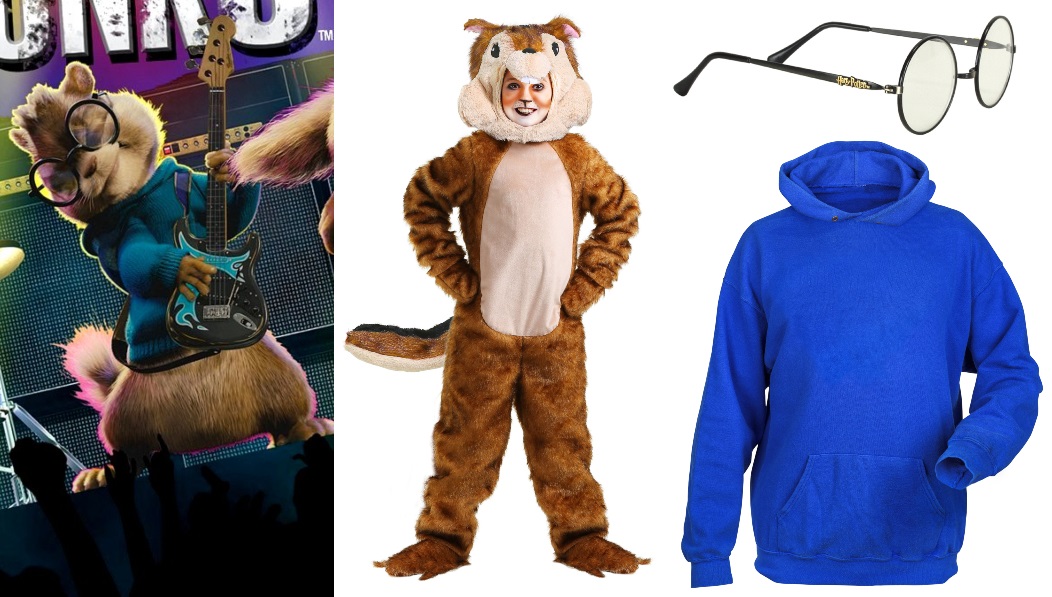 Always the smart one, Simon never ceases to sport his round spectacles as he keeps the group in check. Blue is his color, so make sure that you find either a blue hoodie or a blue long-sleeved shirt that fits over your chipmunk costume. In the movies and cartoons, Simon's glasses are always round, although they flip-flop between being black and blue. (So you can get away with wearing frames in either color!) The only other thing you'll need while wearing your Simon costume is perhaps a pocket dictionary so you can correct everyone's grammar. 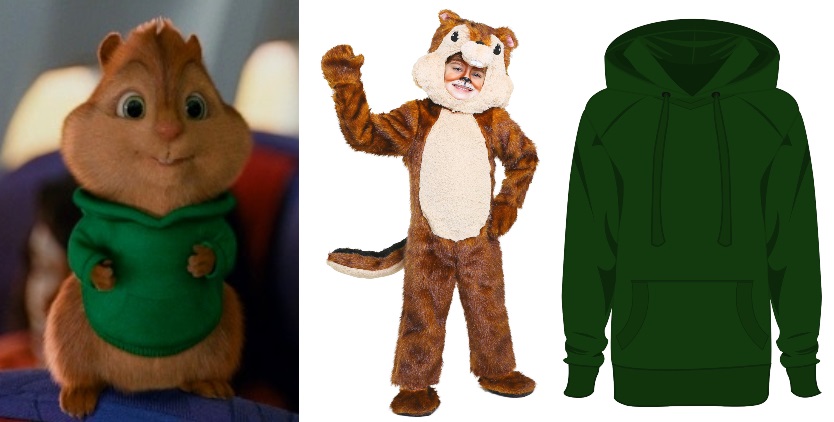 Theodore Seville is the youngest of the three brothers, but that doesn't make him any less important. He's instrumental, after all. (Ba dum tss.) In all seriousness, he's the drummer for their small band, and although rather gullible, you just can't help but love him. Anyone planning on making a Theodore costume needs to wear a green shirt (his signature color) with their chipmunk costume. This easy cosplay idea is sure to be a hit! 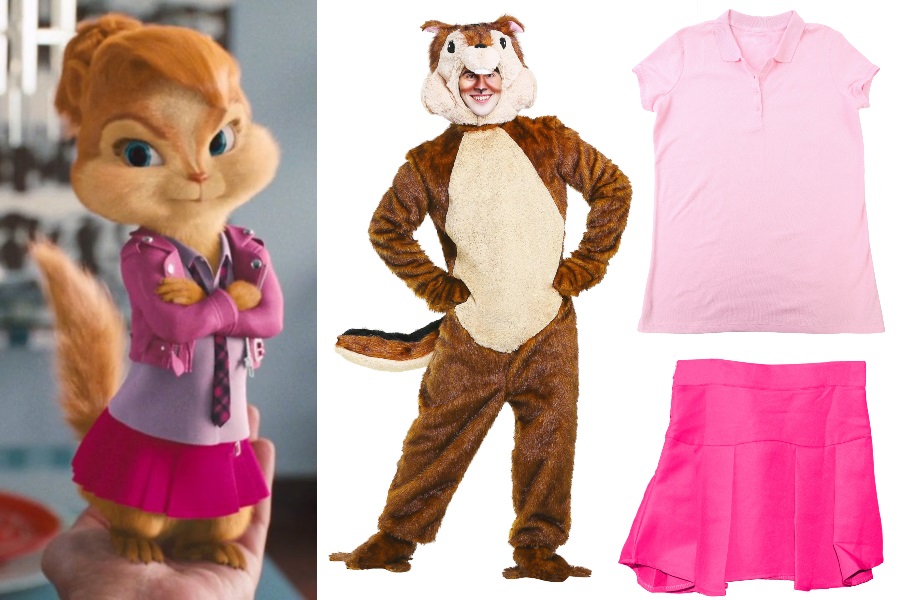 You can't have Alvin and the Chipmunks costumes without costume ideas for the Chipettes! Brittany, the leader of the girl band, is well known for her spitfire personality. Her signature color is pink, and like any young girl, she has quite a few outfits. A Brittany Miller costume should be easily recognizable if you wear pink clothes along with your chipmunk costume.

Like a female version of Simon, Jeanette is the brainiac of their girl band. Depending on which version of Alvin and the Chipmunks you like best, Jeanette has a few more wardrobe options than most of the other characters. The live-action movies had her wearing purple-framed glasses, but they were often pink in the cartoons. Jeanette also wears a variety of purple and blue clothing, so pick your favorites to wear with your costume! 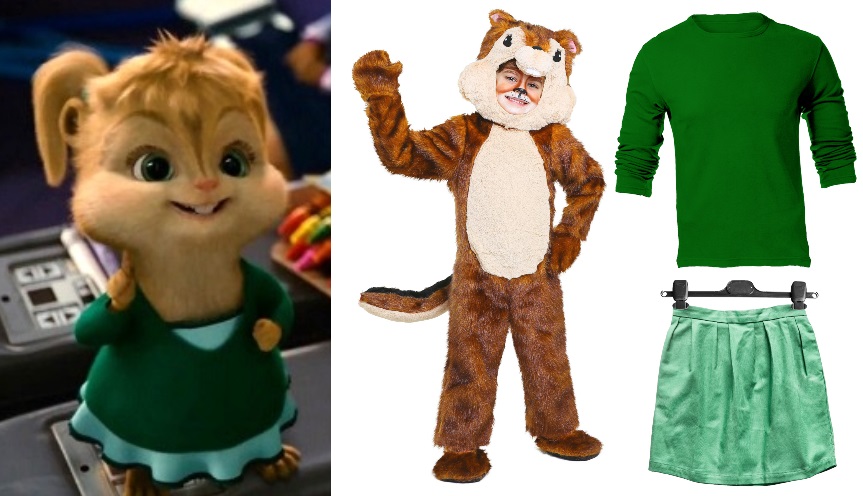 She may be small, but she's got spunk! Eleanor Miller makes for another easy DIY costume. She's our girl in green, and we wouldn't have it any other way. Find a green dress or a green skirt and shirt to go with your chipmunk costume, and you'll look like Eleanor in no time. Then you'll just need to make sure to keep the Chipettes in check as the "group mom".

We hope you enjoyed our easy cosplay ideas with the Alvin and the Chipmunks cast. Do you have a favorite chipmunk? What about your favorite Saturday morning cartoon? Let us know in the comments below! Also, we'd love to hear ideas from you on more costume DIYs that you'd love to see. We have plenty of other animal costumes you can DIY into your favorite cartoon characters!