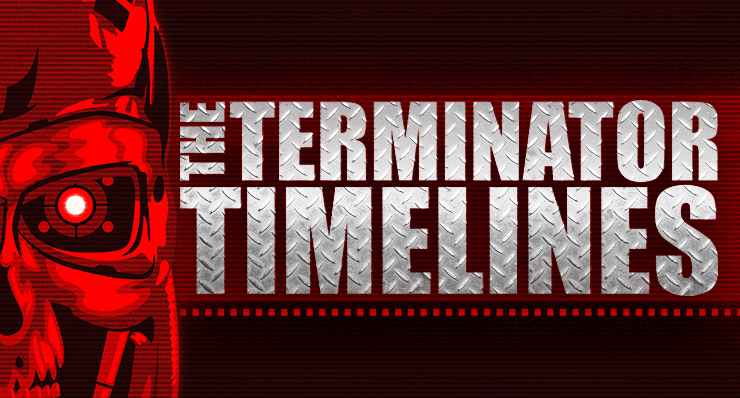 The Terminator series is a science-fiction franchise with cyborg assassins, artificial intelligence, nuclear apocalypse, and time travel. A lot of time travel, including time travel that undoes earlier time travel. As you can imagine, the plot continuity gets complicated across multiple films, a television series, two web series, comics, video games, and other media. The sixth film, Terminator: Dark Fate, is a direct sequel to the second, meaning it wipes out a significant part of the timeline. So we thought this was the best time to explore all of those continuities, including a few stories that never came to be.

The Terminator series spans a variety of media—six movies, a television series, comic books, novels, and more—including sequels, prequels, and reboots. The central plot involves time travel, including time travel that nullifies other time travel. This results in a complex continuity but we clarify everything in this guide to the Terminator Timelines.

In the post-apocalyptic Earth of 2029, the artificial intelligence system Skynet wages war on humankind. A resistance army forms under General John Connor. Skynet sends a T-800 model “Terminator” cyborg (Arnold Schwarzenegger) back in time to 1984 in order to kill Sarah Connor (Linda Hamilton) before she can give birth to John. The future John sends soldier Kyle Reese (Michael Biehn) to stop the T-800. Sarah conceives John with Reese and later crushes the Terminator.

The crushed Terminator was discovered by Cyberdyne Systems, sparking research that will lead to Skynet becoming sentient and starting a nuclear war on “Judgment Day”, August 29, 1997. In 2029, Skynet sends a T-1000 model Terminator (Robert Patrick) to 1995, this time to kill 10-year-old John Connor (Edward Furlong). The future John sends a reprogrammed T-800 (Schwarzenegger) to stop the T-1000. Sarah Connor (Hamilton), John, and the T-800 find and destroy all evidence of the future technology, including both Terminators.

In the future, Skynet sends a T-X model Terminator (Kristanna Loken) to July 24, 2004 with orders to kill members of the future resistance. Kate Conner, John’s wife, sends a reprogrammed T-850 (Schwarzenegger) to stop the T-X. John Connor (Nick Stahl), his future wife Kate Brewster (Claire Danes), and the T-850 find an arsenal of weapons in Sarah Connor’s grave. The T-850 destroys the T-X and itself. John and Kate find themselves in a fallout shelter as Skynet becomes sentient and launches nuclear attacks worldwide.

Cyberdyne Systems created a primitive cyborg named Marcus Wright (Sam Worthington) in 2003. Skynet has waged war since 2004. In 2018, John Connor (Christian Bale) and Kate Connor (Bryce Dallas Howard) are now involved with the resistance, though John is not yet a general. John discovers schematics of the T-800 Terminator and, along with teenage Kyle Reese (Anton Yelchin) and Marcus, destroys the T-800 prototype (Roland Kickinger with CGI to appear like Arnold Schwarzenegger).

In 2027 (instead of 2029), Skynet sends a T-888 model Terminator who assumes the name “Cromartie” (Garret Dillahunt) to 1999 in order to kill John Connor (Thomas Dekker). The future John sends a reprogrammed T-900 model named “Cameron” (Summer Glau) to stop the T-888. Sarah Connor (Lena Headey), John, and Cameron travel forward in time to 2007 where they fight to stop Skynet and prevent Judgment Day.

At some point in the future, Skynet sends a T-1000 model Terminator to 1973 in order to kill 9-year-old Sarah Connor. An unknown person sends a reprogrammed T-800 model with aged features (Arnold Schwarzenegger) to stop the T-1000. The T-1000 kills Sarah’s parents and she is raised by the T-800, which she names “Pops”. In 2029, Skynet sends a T-800 to 1984, where it is intercepted by Sarah Connor (Emilia Clarke) and Pops, who need a Terminator CPU to travel forward in time to 1997 and prevent Judgment Day. Kyle Reese (Jai Courtney) is sent to stop the T-800 and instead helps Sarah and Pops stop the T-1000 (Byung-hun Lee). Reese realizes the timeline has changed and convinces Sarah and Pops to travel to 2017 when Skynet will become sentient. In 2017, Sarah, Kyle, and Pops destroy a new T-3000 model Terminator.

Terminator Genisys was originally planned to reboot the franchise and start another Terminator trilogy.

Sarah Connor (Linda Hamilton) and John Connor (Edward Furlong) infiltrate a Cyberdyne Systems facility. A T-1000 model Terminator (Robert Patrick) arrives and a firefight ensues. The reprogrammed T-800 (Arnold Schwarzenegger) rescues John and takes him forward in time to 2032, followed by the T-1000. They fight an advanced T-1000000 model spider Terminator, John is sent back to his own time, and the T-800 destroys Skynet.

Rights to the Terminator franchise reverted to James Cameron in 2019. He opted to make Dark Fate a direct sequel to Judgment Day.

The DOS game The Terminator (1991) was one of the first sandbox games created and came from Bethesda Softworks, best known for the open world Elder Scrolls series. Players could control Kyle Reese as he protected Sarah Connor and avoided the police, or the Terminator as it attempted to kill Connor and Reese.

RoboCop versus The Terminator (1992)

Did this clear up the Terminator timelines for you? If you still have any questions or think we glossed over something important, let us know in the comments! We’re all looking forward to Terminator: Dark Fate and seeing where the franchise goes from here!