Tell Me More, All Your Grease FAQs Answered 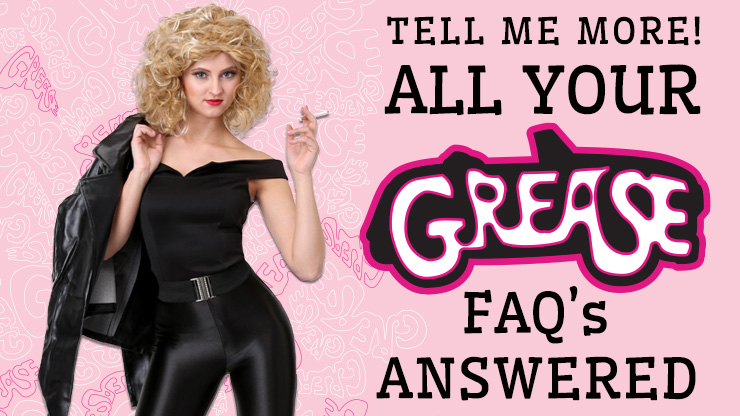 Summer loving have you a blast? Danny Zuko and Sandy Olsson's summer love in Grease is one of the most memorable musical love stories to come out of the '70s. Being part of the Pink Ladies was a girl’s dream. While many boys raced cars pretending they were part of the greaser T-Birds. Still today they are among the most popular Halloween costumes. Its success both critically and commercially even spawned a sequel in 1982. For those less familiar with the movie you likely have questions about it. That’s why we’ve put together a list of top asked questions with their answers.

Where was the 1978 movie Grease filmed?

What time period was the movie Grease set in?

The movie starts in the summer of 1958 with Danny and Sandy meeting on the beach. It continues through the entire school year and ends with the school year end carnival.

What were the Pink Ladies in Grease?

They are a group of girls consisting of Rizzo, Frenchy, Jan and Marty. They each date a member of the T-birds and hang out at Frosty Palace.

What are the names of the Pink Ladies?

Who played the Pink Ladies in Grease?

Is Sandy part of the Pink Ladies?

Sandy doesn’t become part of the Pink Ladies officially because Rizzo thinks Sandy is “too pure to be pink”. By the end of the movie though she is accepted as a female greaser.

Does John Travolta sing in the movie Grease?

Yes, he sang all his own parts. He wasn't originally supposed to be the one who sang "Greased Lightnin" but used his clout to have it changed to his character instead of Kenickie.

What are the names of the T-Birds?

Who played the T-Birds in Grease?

Did we answer all your questions? If you haven’t seen the movie yet, does this make you want to? For those that like musicals, especially those with high school groupies we highly recommend you watch this one if you haven’t.