Property Damage by Superheroes and Supervillains 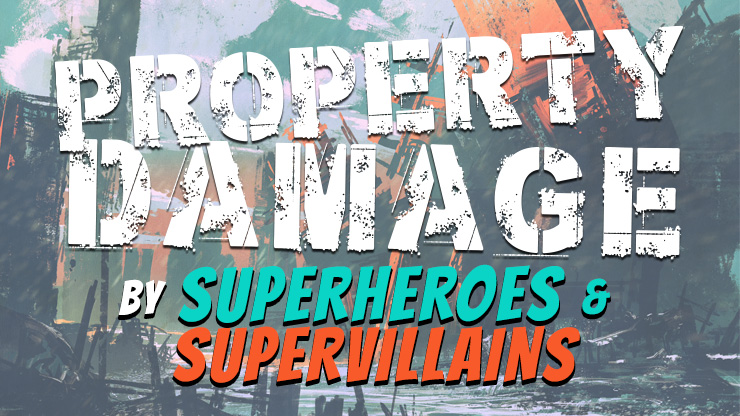 We’re big fans of spectacle here at HalloweenCostumes.com. We love explosive action sequences and flashy special effects. The bigger the better, really, and when superheroes are involved they’re seriously huge. But have you ever thought about all that destruction? People’s lives are saved left and right, but you have to wonder about their livelihoods, right? Every car used as a projectile is someone’s ride to work or school. Every skyscraper toppled means that hundreds or thousands of people are out of a job. It’s something to think about. In fact, it’s something we think about.

So we broke down some of the biggest catastrophes in comic books and movies. We’ll put all this destruction in five categories, starting small and working up to the superheroes and supervillains with the most property damage of all time! Strap in because this road is bumpy after the Avengers came through last week. 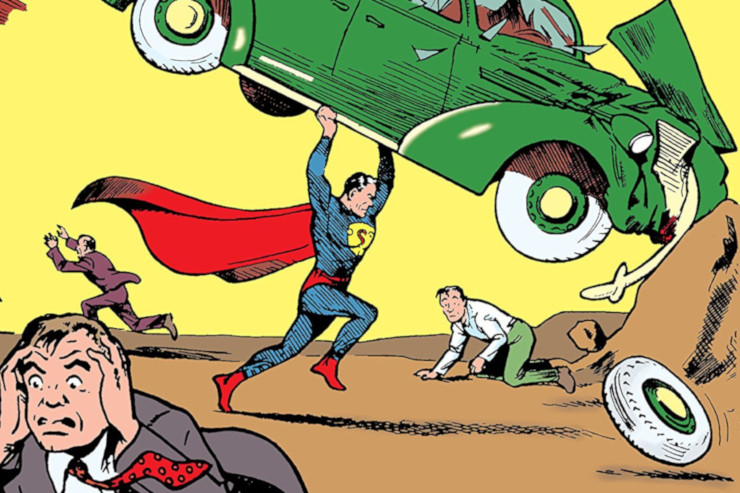 At your lower end of the “property damage” scale, you’ve got your everyday petty vandalism. Sure, pretty much anyone can vandalize some property with rocks and spray paint, but we’re talking about vandals with superpowers here.

Pyro torches some cop cars in X2. Firefist also burns a car plus, well, a little bit of everything in Deadpool 2. When you think about it, cars get burned, crashed, and landed on in pretty much every superhero movie. (If you can't find a soft place to land, look for a car, right?) Car enthusiast website Jalopnik estimated that Tony Stark destroyed $5.68 million worth of cars in Iron Man and Iron Man 2 alone, and he’s the good guy!

Which brings us to an important point. Superheroes tend to damage a lot of property in comics and movies, but it’s usually because they’re saving the Earth from a greater threat. “You can't make an omelette without breaking eggs” and all that. So we’ll try our best to differentiate damage that's excessive or could easily have been avoided from damage that’s entirely the villain’s fault. Anyways, let’s move on to some more substantial damage caused by superheroes and supervillains. 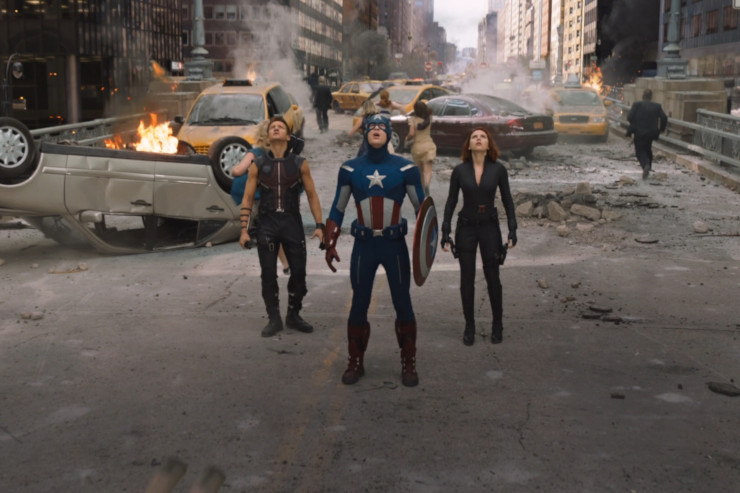 Comics are all about taking something ordinary and making it extraordinary. Give a human some extra-human powers and—BAM!—you’ve got a superhero. Or a supervillain, sure. But their fights are also amped up and elevated, literally to rooftops and skyscrapers or even into outer space. And that means plenty of opportunities for amped up damage.

Electro and Spider-Man—okay, mostly Electro—destroy much of Times Square in The Amazing Spider-Man 2. The Power Rangers, the Incredibles, and the Jaegers in Pacific Rim flattened plenty of buildings and sometimes even neighborhoods. While a bit outside the superhero realm, Godzilla tipped over plenty of skyscrapers as a villain in the earlier movies and a hero in the later movies. There’s not much data on the cost of all this damage, although Kinetic Analysis Corp. estimated that the single “Battle of New York” between the Avengers and the Chitauri in The Avengers would have cost about $160 billion. In addition to that $160 million, consider that Bestman Salvage was hired to clean up after the battle. Adrian Toomes used Chitauri technology to become Vulture, leading to even more property damage totals in Spider-Man: Homecoming. It’s a never-ending cycle.

Then you’ve got damage to Metropolis and Chicago in Man of Steel. According to a study for BuzzFeed, Watson Technical Consulting estimated that the battle between Superman and Zod would have cost $2 trillion.

But again, it’s not fair to pin that entirely on Supes. He wouldn’t have caused any damage if Zod hadn’t shown up, right? Yet there’s still criticism that these heroes didn’t do enough to move the battle elsewhere. Superman in particular was able to fly Zod around, ramming him through building after building, but he couldn’t drag him outside the city itself? 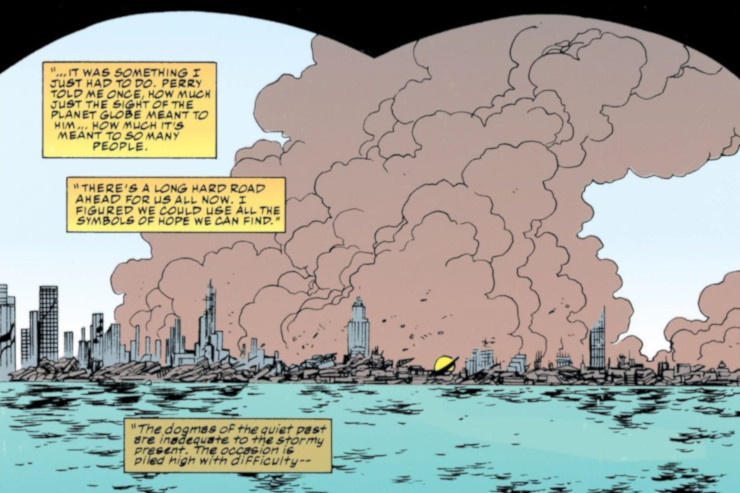 The fight between Supes and Zod in Man of Steel destroyed much of Metropolis, but there have certainly been bigger battles. The city of Novi Grad, Sokovia is left in ruins after the events of Avengers: Age of Ultron. Ultron was the main instigator, but the Avengers took the blame since, well, Ultron wasn’t exactly around afterward. Plus there’s the fact that Tony Stark created Ultron in the first place. Oops!

"But wait a minute," you’re saying, "even parts of Metropolis are probably worth more than all of Novi Grad." Fair enough, so let’s move on to some really metropolis-level damage.

All of New York City gets leveled by an atomic blast in Watchmen. Metropolis—which is basically New York—also gets destroyed by Lex Luthor in Action Comics #699 (May 1994) through #701 (July 1994). Then there’s Xandar which was partially destroyed in Guardians of the Galaxy. (With their level of technology, we’re putting them on the same level as New York.)

Note that Ozymandias bombs New York because he considers it “for the greater good”. And Rocket crashes a ship into the Dark Aster, which causes it to fall on Xandar. That's intentional and negligent damage from the “good guys”. But only Lex Luthor can be blamed for the missiles that destroyed Metropolis!

So how do you put a price on all of New York? Or all that advanced technology on Xandar? If the damage from Man of Steel came to a couple trillion, we’re guessing…what? Hundreds of trillions? Quadrillions? Is that even an amount of money that exists? But that brings us to an even bigger question…. 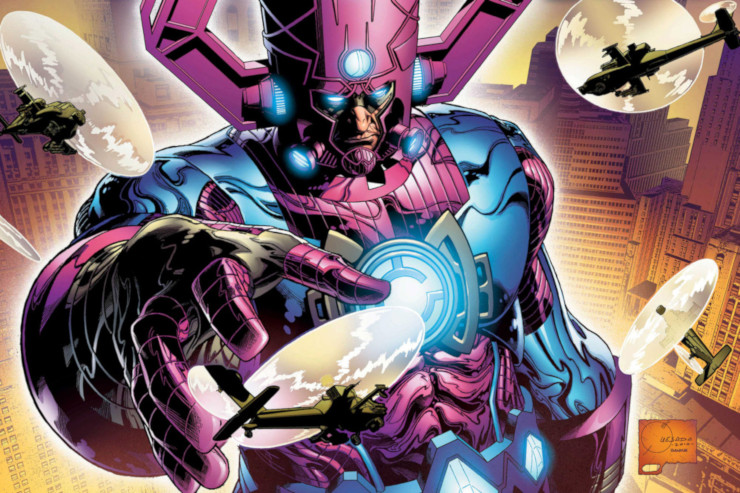 How do you estimate the property value of a planet? Because now we’re getting into some damage that's impossible to calculate. World-shattering damage! Plenty of superheroes and supervillains are capable of trashing a car or a building, some even a city. But few are able to destroy a planet.

Thor’s Godblast certainly has that level of power, at least in some stories. Characters like Silver Surfer, Beta Ray Bill, and Hyperion actually did it. Some were for good reasons, some not. Hyperion even destroyed his own homeworld just so he could be a hero! But the reigning king of planetary destruction is none other than Galactus.

Galactus destroys or consumes a number of worlds: Archeopia, Poppup (homeworld of Poppupians like the Impossible Man), Tarnax IV (homeworld of the Skrull), New Korbin (adopted homeworld of Korbinites like Beta Ray Bill), Orbucen, Sakaar, Saiph… Well, you get the idea. It was a lot. And the thing to remember with Galactus is that he doesn’t simply destroy those planets, he consumes them. (Forget about property values here and think about the calories!) His need to consume planets—called the “Hunger”—also kickstarted plenty of other strife. 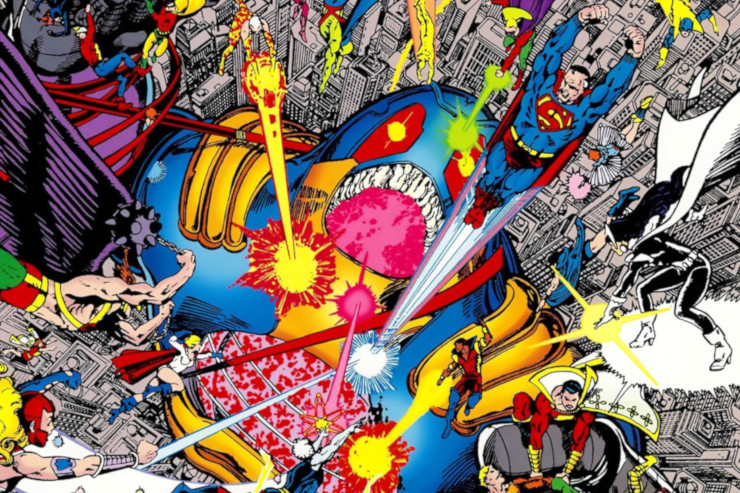 Alright, so Galactus is at the top so far. But we have one more magnitude of damage to consider, and that’s universe destruction! Before we dig in, it’s important to understand that comic books are usually filled with multiple universes, each with their own Earth. For example, Earth-616 is the mainstream continuity in the Marvel universe, Earth-199999 is the Earth of the Marvel Cinematic Universe (MCU), and DC Comics currently has 52 Earths plus other weird multiverses. We mention this because the destruction of a universe doesn’t necessarily mean our universe or every universe.

Characters like Dark Phoenix, the Gentry, Korvac, and Superman-Prime destroyed a universe, and the Anti-Monitor destroyed many. Sub-Mariner and the Cabal destroyed several universes to save Earth-616 and its universe, so that’s…kind of a win? Also in the “kinda bad, kinda good” category include some fantastic universal reboots including Bat-Mite and Mxyzptlk, Fury, Mister Fantastic, and Mr. Snap himself, Thanos. Universal destruction happens frequently enough that sites like CBR have list-ified them. It's kind of ridiculous, really.

So that brings us to the end of this list. If we have to choose the worst offender of them all, it would be Anti-Monitor. He literally destroyed a bunch of universes at once. Now that’s big-time property destruction.

Did we forget your favorite superhero or supervillain? Or what about your favorite bit of destruction from the comics or movies? Do you think that all damage is the fault of the villain or does the hero deserve some of the blame? Let us know in the comments!