Scum and Villainy of the Mos Eisley Cantina [Infographic] 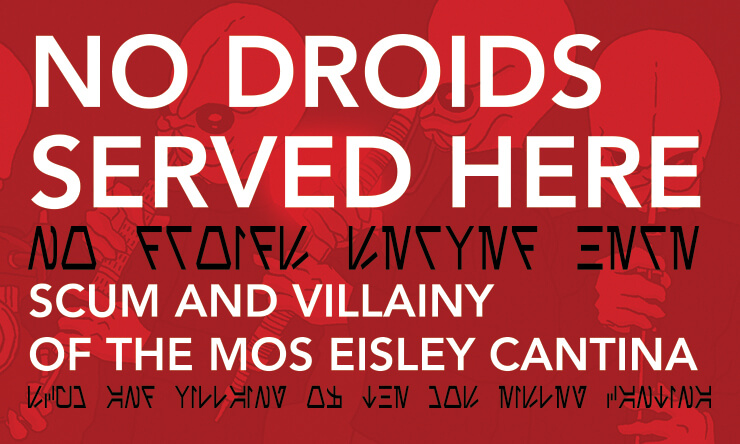 If the Mos Eisley Spaceport is a “wretched hive of scum and villainy”, then surely Chalmun’s Cantina is the center of that hive. Popularly known as the “Mos Eisley Cantina”, Chalmun’s is the dim bar where Luke Skywalker and Obi-Wan Kenobi first meet Han Solo and Chewbacca in Star Wars: Episode IV A New Hope. But in addition to freighter pilots and smugglers like Han Solo, the cantina is home to bounty hunters and imperial spies and men with “the death sentence on twelve systems”. No droids, though, because the bartender Wuher likes to keep out the riff-raff.

This is a visual guide to the many colorful characters in Chalmun’s Cantina on that single day in year 0 BBY (Before the Battle of Yavin). Of course, in the real world, these characters were filmed over the course of several weeks in 1976: exterior shots in Ajim, Djerba, Tunisia on April 2-3 and interior shots on Stage 6 at Elstree Studios in Borehamwood, Hertfordshire, England on April 13-21. (A final set of close-ups was also filmed at Hollywood Center Studios in Hollywood, California in early 1977.) Our guide is based primarily on in-universe Star Wars canon sources and behind-the-scenes details. Any no-longer-canon “Legends” (formerly the “Expanded Universe”) sources are noted accordingly.

Scum and Villainy of the Mos Eisley Cantina Transcript

What did you think? Who is your favorite character from Chalmun’s Cantina? In fact, let’s open up the comments to Star Wars in general. Where were you when you first saw A New Hope? How many times have you seen The Last Jedi teaser? We’d like to thank the StarWars.com Databank, Wookieepedia, and AmShak at The Bothan Spy Forums for some facts used in this guide, and we can’t forget the (often uncredited) actors and artists and designers who brought these characters to life. If all this talk has got you in the Star Wars mood, remember that we carry all kinds of Star Wars costumes for adults and kids!