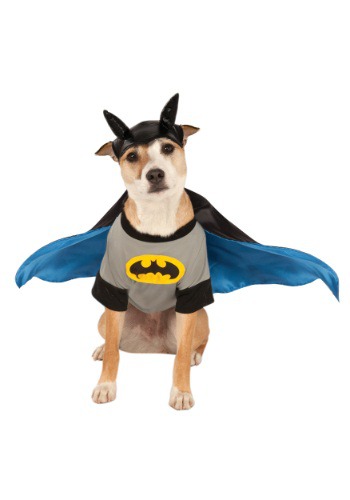 Did you even know that Batman had a dog, bro? He totally did! In Batman and Robin Vol 1: Born to Kill, as part of the new reboot of the DC Comics Universe, Bruce gets himself an adorable black Great Dane from a kennel, intending to keep and train him himself, but then later on, he ends up giving the dog to his son, Damian. Talk about a lucky pet rescue!

So if you also envision your pet as a fearless caped crusader, then maybe it's time to let him suit up to help save the city! The Batsignal is shining bright in the night sky, so suit him up in this officially licensed Batman Pet Costume, and he'll be ready to battle any canine threat that comes his way! Made of 100% polyester, the shirt encloses with Hook and Loop fastener along the back, the cape attaches to the shirt with Hook and Loop fastener, and the headpiece has a drawstring for secure but comfortable fastening! But just a word of warning: If you happen to have a Batmobile, you still better be sure to do the driving. He might be a world class hero now, but those paws still won't reach the pedals! Ruff!