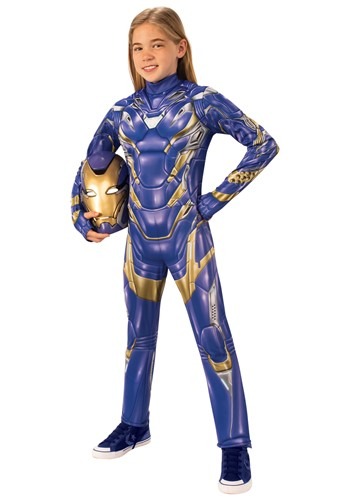 There's a lot of debate about what happens to young Morgan Stark after the events of Endgame. Some have rushed to view the deleted scenes in order to get as much time with the Avengers as possible. Those who have know that little Morgan may grow up to be quite the gal. But, how about all of those years leading up to the future? Now that Spidy is finally ready to do his own thing, we've got to wonder who Tony Stark's spiritual protege will be.

It only makes sense that the next Iron Man should be the kiddo who knows all about numbers. (That 'I Love You 3000' bit clearly stole the collective heart of the Marvel fanbase!) No doubt, even if Pepper tries to keep her away from the ambitions of world-saving, little Morgan is going to rush to follow in her father's steps as quick as she can. It's just a good thing that Tony would never leave folks behind without preparing a little something to make the journey fun.

It looks like Iron Man was hard at work crafting a power suit that is perfect for the tykes, too. This officially licensed Rescue Deluxe costume from Avengers: Endgame is a stylized jumpsuit designed to look just like Pepper's power armor The printed fabric has gold and purple to create the unique style of the MK 1616 armor and has quilted foam sewn into the interior to give it an armored appearance. The included molded plastic mask transforms your tyke fully and gets them ready for their role in the Marvel Cinematic Universe.

Whether your tyke wants to cosplay as Pepper Potts in her Rescue identity or show the world what Morgan Stark could become, this Avengers: Endgame costume is a perfect step. You might even earn an I Love You 3k, yourself. (Just try to hold back the tears!)